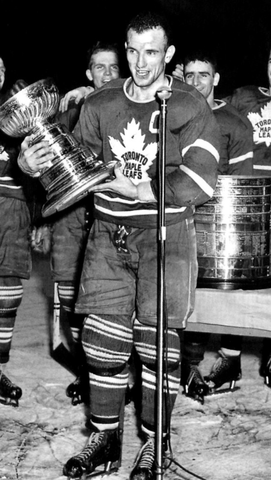 Teeder Kennedy Captained The Toronto Maple Leafs to the 1st NHL Stanley Cup
3 peat, winning in 1947, 1948 & 1949 -
Theodore Samuel "Teeder" Kennedy (December 12, 1925 – August 14, 2009) was a Professional Ice Hockey centre who played his entire career with the Toronto Maple Leafs from 1942 to 1957 and was captain for eight seasons. He was the first player in NHL history to win five Stanley Cups - He was an essential contributor to the Maple Leafs becoming the National Hockey League's first dynasty. He was inducted into the Hockey Hall of Fame in 1966. He has been called the quintessential Maple Leaf and by some the greatest player in the team's history - Conn Smythe was quoted saying: Ted Kennedy was not a superbly gifted athlete the way some players were, But he accomplished more than most of them by never playing a shift where he did not give everything he had