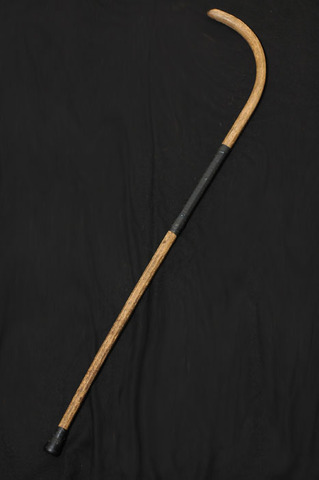 Shinny Stick - tabé gasi zhon.. Shinny is called: tabé gasi. tabé 'ball', gasi, '', zhon 'stick or wood' - Wood, plastic tape, rubber. This shinny stick, possibly made from hickory, was crafted by Tom C. Walker circa 1940. He used it to play shinny on the Omaha reservation. A game similar to field hockey, two teams of men would attempt to drive a flattened circular ball through goal posts on opposite ends of a freshly cut hay meadow. After retiring from the game, Tom C. converted the shinny stick into a cane in his later years. He gifted this shinny stick to Mark Awakuni-Swetland in 1994.