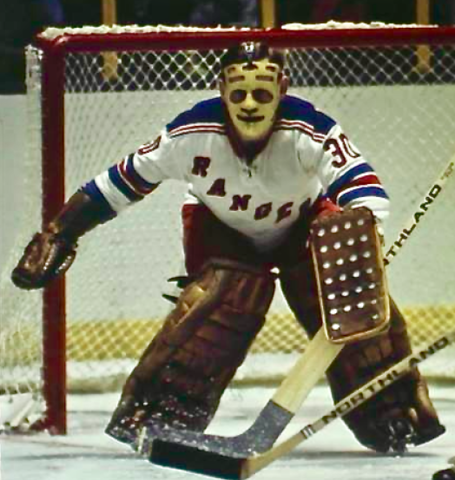 After a season in the junior leagues with the Guelph Biltmores of the OHA, Gilles Villemure had a lengthy ten-year apprenticeship in the minor leagues, New York Rovers and Long Island Ducks of the EHL, and principally with the Vancouver Canucks of the WHL, the Baltimore Clippers and the Buffalo Bisons of the AHL. He was a star in the minors, but despite being signed by the Rangers in 1963, he only saw spot duty in New York during the Sixties, making his NHL debut on November 20, 1963 vs Boston Bruins in a 1-1 tie at Madison Square Garden. He played 5 games with the Rangers in 1963, having 3 ties and 2 losses.

During the 1967-68 season, Villemure was playing for the AHL Buffalo Bisons now, having a solid season, he was called up to the NHL, playing 3 full games and a 3rd period in relief of Ed Giacomin. Villemure got his 1st NHL victory on November 26, 1967 vs St. Louis Blues, a 1-0 shutout at Madison Square Garden.

In each of his final two seasons in the AHL (1968-69 and 1969-70), he won the Les Cunningham Award with the Bisons as the league's most valuable player, leading all goaltenders in the playoffs the second year to backstop the Bisons to the 1970 Calder Cup championship in their final season. He also was awarded the Harry "Hap" Holmes Memorial Award for 1968-69 and 1969-70 seasons

During his minor league career, he led his league in goals against average three times and in shutouts five times.

Rangers' management took notice, and the 1970–71 season saw Villemure recalled for good as the backup to Eddie Giacomin. Over the next three seasons, Villemure recorded a sparkling 66–27–10 mark, with ten shutouts and a goals-against average never higher than 2.30, and shared the Vezina Trophy with Giacomin in 1971. He was named to play in the NHL All-Star Game all three seasons (1971, 72, 73), allowing only a single goal and recording the lowest career GAA of any All-Star Game goaltender. The Rangers were a powerhouse in that time, reaching the Stanley Cup finals in 1972.

By the 1974–75 season, with both goaltenders aging, Villemure had become the number one goaltender in New York, but had only modest success, and was traded to the Chicago Black Hawks in the offseason. He backed up Tony Esposito his two remaining years, only appearing in 21 games in all, retiring after the 1976–77 season.

In total, Villemure appeared in 205 NHL games, notching 100 wins, 13 shutouts and a 2.81 career goals against average.