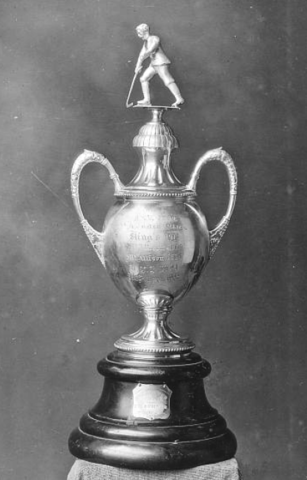 Frederick William Sumner / F.W. Sumner donated this trophy for the new Intercollegiate Hockey League, which formed for the 1908-09 season.

The Sumner Trophy / Sumner Cup which it was known by, was first competed for by teams from Acadia University, Mount Allison University and the University of New Brunswick / UNB. In 1911 Kings's College (Halifax) joined the league.

The first team to win the Sumner Trophy 5 times would retain the trophy.

Frederick W. Sumner was a hardware merchant / importer from Moncton, New Brunswick. Sumner built and owned a number of vessels which were engaged in this trade. He also for a number of years carried on, in connection with his Moncton business, extensive lumbering and milling operations at Bathurst. At one time he was president of the board of directors of the St. John and Quebec Railway company.

Sumner also served as Agent General for New Brunswick in London, England, and during the first world war looked after the interests of New Brunswick soldiers overseas.

Sumner was the mayor of Moncton on 3 different occasions, and served as a Conservative member in the Legislative Assembly of New Brunswick from 1895 to 1899.