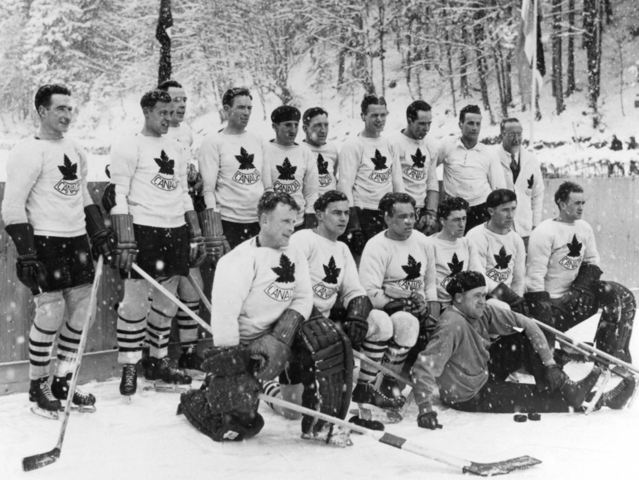 NOTE
Coach Albert Pudas is the only coach in Team Canada history who was not born in Canada, and was also the first Finnish born National Hockey League player. Pudas played only 4 games in the NHL starting on December 30, 1926 for the Toronto St. Patricks.

NOTE
Not all Team Canada players were from the Port Arthur Bear Cats.
The Canadian Amateur Hockey Association added Ralph St. Germain, Dave Neville and Hugh Farquharson of the Montreal Royals, Kenneth Farmer from the Montreal Victorias and Jimmy Haggarty of the Wembley Canadians, who was already playing in England.

Great Britain would win the Gold Medal, Canada the Silver, and USA the Bronze.

The tournament itself featured very close play for the medals. It was played in three rounds beginning with four groups. The top two nations from each group (eight in all) then advanced to a semi-final round of two groups of four teams, and the top two from these two groups played a finals round robin among the four final teams. However, it was only after the second round that tournament officials declared that results from that second round would count toward the final round.

In the first round the Italians pulled off the biggest upset of the tournament, beating the USA two to one. While that result had no real impact on the tournament, when Great Britain Hockey player Edgar Brenchley scored late in the third to defeat Canada two to one, history was made.

The common practise for outdoor tournaments was to have results carried forward, so when the British team shocked the Canadians by defeating them in the semi-finals, that result also counted in the final round. The British team then tied Germany, advancing to the finals, where they proceeded to beat Czechoslovakia.

The American and British teams had played six scoreless periods before the game was called a tie, ensuring, at the very least, that Great Britain would get a Silver Medal, if not Gold. The Canadians, unable to replay the Brits, could only hope for a silver if they beat the USA. The American team could still achieve gold in a variety of tie-breaking scenarios, but were very tired from the marathon scoreless tie, and lost one to nothing. With that result the British team clinched history, the first team in Hockey history to win the Olympic, World, and European Championships