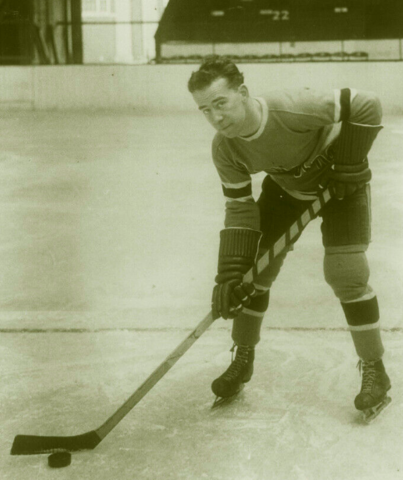 Rodden then played junior Hockey with the Parkdale Canoe Club for 1 season in 1918-19, before joining the Woodstock Juniors / Athletics in 1919-20, and finished his junior career with the Toronto De La Salle the following season.

Rodden had played some exhibition games with the Toronto Granites as a junior, and they signed him for the 1922-23 season. Rodden would help the Granites win the 1923 Allan Cup championship.

Rodden was lured south to play in Minnesota, USA with the Eveleth Rangers (1923-24), Eveleth Arrowheads (1924-25) in the USAHA, and when the USAHA ceased to be an active organization, he joined the Eveleth-Hibbing Rangers in the newly formed Central Hockey Association / CHA for the 1925-26 season.

Rodden then turned pro with the Minneapolis Millers of the American Hockey Association / AHA for the 1926-27 season, playing 19 games with them before the Chicago Black Hawks signed him. He played his 1st NHL game on January 22, 1927 vs the Boston Bruins, picking up 1 assist in his debut.

Rodden scored his 1st NHL goal on February 11, vs George Hainsworth of the Montreal Canadiens. He played 19 games with the Black Hawks to finish the 1926-27 season, and 2 playoff games.

Rodden started the 1927-28 season with the Black Hawks, playing in 9 games, when he was traded to the Toronto Maple Leafs, and finished the season in Toronto.

Rodden signed with the Boston Bruins for the 1928-29 season, but would split the season between Boston and the Windsor Hornets of the Can-Pro league.

Rodden then joined the London Panthers of the International Hockey League / IHL for the 1929-30 season, scoring career highs in both goals (13) and 30 assists, which was tops in the IHL that season.

The New York Rangers took notice of Rodden's scoring, and signed him for the 1930-31 season, but after picking up just 3 assists in 24 games, was sent to the IHL Pittsburgh Yellow Jackets. Rodden played with the Yellow Jackets until the end of the 1931-32 season.

Rodden finished off his Hockey career with stops back in the Can-Pro with the Quebec Castors and IHL Windsor Bulldogs (1932-33), and a final season with the AHA Tulsa Oilers in 1933-34.

Rodden is listed as winning the 1929 Stanley Cup with the Boston Bruins, but never played in the playoffs with the Bruins, playing his last game in a Boston jersey on January 22, 1929, and in fact finished the 1928-29 season with the Windsor Hornets, also playing in 3 playoff games for the Hornets.

Eddie Rodden is the Younger brother of Mike Rodden, who was a famous sports journalist, football & Hockey player and coach. Mike Rodden was also the 1st person elected into both the Hockey Hall of Fame (1962) and the Canadian Football Hall of Fame (1964).