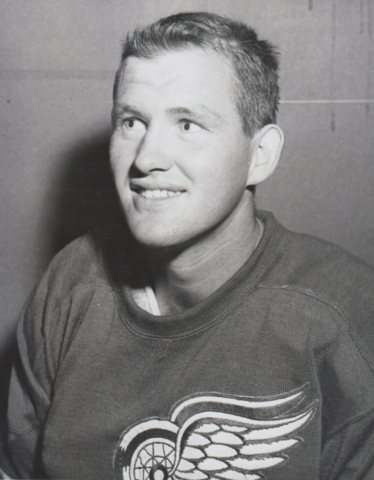 Godfrey played his junior Hockey with the Ontario Hockey Association / OHA Galt Black Hawks, then finished his junior career with the Waterloo Hurricanes during the 1950-51 season where he was a OHA league leader in penalty minutes.

Godfrey turned pro with the Tacoma Rockets of the Pacific Coast Hockey League / PCHL for the 1951-52 season, which was the final season of the PCHL.

Godfrey then signed with the NHL Boston Bruins, making his debut on October 16, 1952, and scored his 1st NHL goal on January 11, 1953, which was his only goal that season, and also finished with 13 assists. Godfrey played 2 more full seasons in Boston and played in the 1955 NHL All-Star Game.

Godfrey was then traded to the Detroit Red Wings with Ed Sandford, Real Chevrefils, Norm Corcoran and Gilles Boisvert for Terry Sawchuk, Vic Stasiuk, Marcel Bonin and Lorne Davis, June 3, 1955, and Godfrey would play the next 7 seasons in Detroit, helping them reach the Stanley Cup finals in 1956 and 1961.

Godfrey was then claimed by Boston from the Red Wings in the Intra-League Draft, June 4, 1962, playing 1 full season before being traded back to Detroit for Gerry Odrowski, October 10, 1963. He played just 4 games for the Red Wings, as Godfrey spent the season playing for the American Hockey League / AHL Pittsburgh Hornets. He split the 1964-65 season between the Hornets and Red Wings.

Over the next 3 seasons, Godfrey played for the Red Wings, Hornets and the CPHL Memphis Wings / Fort Worth Wings, He played his final NHL game on January 24, 1968.

Godfrey finished his Hockey career back in the AHL, playing the 1968-69 season with the Rochester Americans.