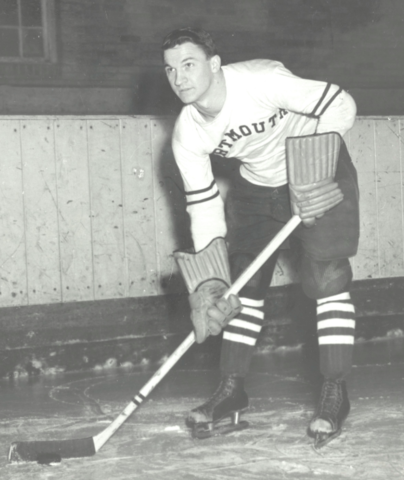 Warburton went on to become a multiple sport star at Dartmouth College, then one of the United States most powerful Hockey programs.

At Dartmouth, Warburton was part of a renowned forward line with the Bruces, (Cunliffe and Mather), later his Olympic teammates.

Warburton also became a key figure at Dartmouth, along with fellow Rhode Island legends Dick Rondeau, George Pulliam and Jack Kilmartin, in an historic 46-game unbeaten string. A natural-born leader and a prolific scorer, he co-captained the Big Green to the U.S. National #1 ranking in the 1946-47 season, prior to the advent of NCAA Hockey championships.

Later that year, under the team name of Hanover Indians, Warburton’s Dartmouth squad captured the National AAU title in Providence.

Warburton was recognized as a powerful skater and deft puck handler and became Rhode Island's first Olympic Hockey player when he was selected as a member of the American Hockey Association / AAU team chosen to play in the 1948 Winter Olympics in St. Moritz, Switzerland. USA finished 4th.

He starred on that team, scoring 17 goals and 9 assists in the USA’s eight Olympic contests.

On his return to the USA, Warburton helped Lou Pieri’s Rhode Island Scarlets to the Atlantic Amateur Hockey League (AAHL) championship and then to the National American Hockey Association (AHA) title in Ohio.

Warburton turned pro with the Milwaukee Clarks of the International Hockey League for the 1948-49 season, playing in Milwaukee for 2 seasons.

Warburton then joined the Boston Olympics in the Eastern Amateur Hockey League / EAHL for the 1950-51 season, scoring 33 goals, 30 assists during the regular season, and 4 goals in the
playoffs, as Boston won the 1951 EAHL championship.

Warburton played one more season in the EAHL this time with the Worcester Warriors, retiring at seasons end.

After his playing days, Warburton became a dedicated youth Hockey coach and pioneer among on-ice officials – a mentor to dozens of Hockey referees and a builder of the RI Ice Hockey Officials Association, one of the six founding chapters of the National Ice Hockey Official’s Association / NIHOA. He was elected National President of the NIHOA in 1966.

Ralph A. Warburton was inducted into the Rhode Island Heritage Hall of Fame in 1968.

Ralph A. Warburton was the first recipient of the Malcolm Greene Chace Memorial Trophy in 2018.