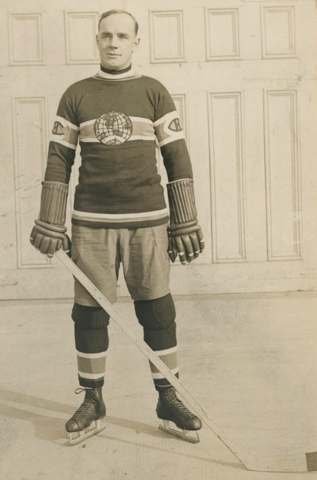 Coutu then turned pro with the Montreal Canadiens for the 1916–17 season, which would be the last season of the National Hockey Association / NHA, helping the Canadiens win their 2nd O'Brien Trophy as champions of the NHA. The Canadiens then traveled to the West Coast to play the Seattle Metropolitans. Seattle took the best-of-five series, becoming the first American team to claim the title of Stanley Cup champions

Coutu stayed with the Canadiens when the new National Hockey League / NHL formed for the 1917–18 season. Play was held in two halves, December 19 to February 4, and February 6 to March 6. Montreal had won the first half of the NHL split season and the Arena Hockey Club (Toronto) had won the second half. The two teams then played a two-game total goals series for the NHL championship. Toronto won the series and advanced to the Stanley Cup Finals.

In the 1918-19 season, the Canadiens finished 2nd in the three-team NHL and defeated the Ottawa Senators in the playoffs to win the NHL championship, and once again head West to play Seattle. During the Stanley Cup finals in 1919 vs the Seattle Metropolitans, Coutu and four other teammates contracted the influenza epidemic and were hospitalized. The 1919 Stanley Cup series was cancelled after 5 games had been played.

Coutu played the next season in Montreal, and was then was loaned to the NHL Hamilton Tigers by Montreal for the 1920-21 season with the trade of Goldie Prodgers, Jack Coughlin and Joe Matte for Jack McDonald, Dave Ritchie and Harry Mummery, November 27, 1920, Coutu scored 8 goals, 4 assists for the Tigers during the season. His 12 points would be a career NHL high. Also another career NHL high, was his 95 penalty minutes during the season.

Coutu was returned to Montreal by Hamilton, November 15, 1921, and would play the next 5 seasons in Montreal.

Coutu would play strong defensive Hockey for Montreal, not allowing himself to be limited by the rules of play, no tactic was too underhanded or brutal for Coutu, and he was a key member of the defence when Montreal won the 1924 O'Brien Trophy as NHL champions, and the 1924 Stanley Cup championship, defeating both the Vancouver Maroons (semi-final) and the Calgary Tigers for the championship.

The next season, Coutu and the Canadiens would win the 1925 O'Brien Trophy as NHL champions, but lose to the Victoria Cougars in the 1925 Stanley Cup finals.

Wearing No. 9, Coutu was named Canadiens captain in 1925, replacing Sprague Cleghorn. After the 1925–26 NHL season, Coutu was deemed expendable and traded to the Boston Bruins for Amby Moran, October 22, 1926, where he played his final 47 NHL games, but did help the Bruins reach the 1927 Stanley Cup finals.

During his first practice with the Bruins, Coutu body-slammed Eddie Shore. Coutu's forehead hit Shore's skull, severing Shore's ear. Shore visited several doctors who wanted to amputate the ear, but finally found one who sewed it back on. After refusing anaesthetic, Shore used a mirror to watch the doctor sew the ear back on. Shore claimed Coutu used his Hockey stick to cut off the ear, and Coutu was fined $50; Shore later recanted and Coutu's money was refunded.

The final game ( game 4) of the 1927 Stanley Cup final on April 13, was filled with penalties and a bench clearing brawl near the end of the game, that saw police come on to the ice to help the referees stop the fighting. After the game ended, Coutu assaulted referee Dr. Jerry Laflamme and tackled referee Billy Bell in the corridor leading to the referees dressing room. As a result, he was fined $100, and expelled from the NHL for life; the longest suspension to date.

Coutu stayed playing pro Hockey, but moved his game to the Canadian-American Hockey League / Can-Am with the New Haven Eagles for the 1927-28 season, having a career high 108 penalty minutes, including bludgeoning Boston Tigers player, George Redding with a stick to the head, and being suspended for the season by Can-Am on January 23, 1928, but then the suspension lifted by Can-Am and changed to a $200 fine on January 29, 1928.

Reports had Coutu feeling Bitter with no remorse about his on ice tactics and his NHL ban.

Coutu played the next season for the Can-Am Newark Bulldogs, having a relative quiet season with only 42 penalty minutes, and just 1 assist.

Coutu then signed with the American Hockey Association / AHA Minneapolis Millers for the 1929-30 season but then came some surprising news. On Oct. 8, 1929, NHL President Calder decreed that Coutu was free to sign with any NHL team, provided that his current squad in Minneapolis released him.

“Coutu has been training all season and is fit and ready to start strenuous practice at any time,” the Gazette gushed. “He looks fit and ready and will no doubt prove a useful defenceman to some of the clubs in the N.H.L. this season. For the past two or three seasons Coutu has been playing in the minor leagues and has made good with each of the clubs he represented. He has been in Montreal since the close of last Hockey season and late this summer started in to get in condition for Hockey.”

The NHL comeback never happened, and Coutu played for Minneapolis that season, apparently not happy, as he led the AHA in penalty minutes with 105, and warnings from the league about his playing tactics "change his ways or his residence" which he did the next season, his last as a player, as he played in just 33 games for the Millers before retiring in 1931.

Coutu became the coach of the Providence Reds in 1932 on the recommendation of former Reds coach and ex teammate Sprague Cleghorn to start the 1932-33 Can-Am season. Coutu coached the Reds for 3 seasons, winning the 1934 Henri Fontaine Trophy as league champions.

Interesting family history of Coutu - he is related to Howie Morenz and the three generations of NHL Geoffrions - Boom Boom, Dan and Blake.

Coutu's wife Gertrude was the sister of Ms. Aird Stuart, the mother of Mary Morenz, wife of Hockey Hall of Fame member Howie Morenz and grandmother to their daughter Marlene Geoffrion, wife of Bernie Geoffrion

Boom Boom married Morenz's sister, and their son Dan was a 1st round draft pick of the Montreal Canadiens. Blake became the first 4th generation player in NHL history when he debuted in the NHL in 2011.