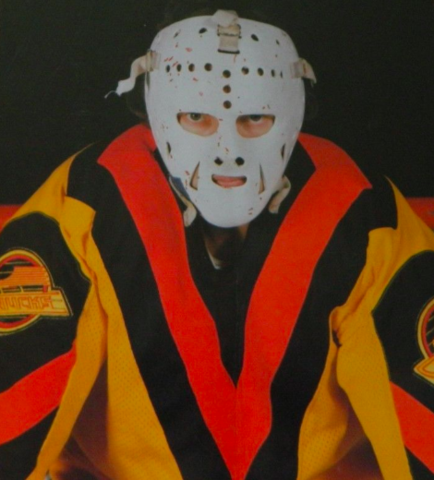 Bromley played his junior Hockey for the Regina Pats from 1968 to 1971, and then was signed as free agent by the Buffalo Sabres, September 29, 1971.

Turning pro, Bromley first played for the Charlotte Checkers in the Eastern Hockey League / EHL during the 1971-72 season, and finished the year with the Cincinnati Swords of the American Hockey League / AHL.

Bromley played the next 2 seasons with the Cincinnati Swords, helping the Swords win the 1973 Calder Cup championship.

The Buffalo Sabres brought him up to the NHL in the spring of 1974, where he played in 12 games.

Bromley then played the 1974-75 season with the Sabres, and posted a 26-11-11 record and four shutouts but was relegated to back up status when Buffalo acquired Gerry Desjardins late in the season.

Bromley had a tough year with injuries during the 1975-76 season, playing just 1 game for the Sabres and 7 games for the AHL Providence Reds.

Bromley had his WHA rights traded to the Calgary Cowboys, August, 1976, and joined the Cowboys for the 1976-77 season, playing in 28 games.

Bromley was signed as free agent by the Winnipeg Jets after Calgary franchise folded, May 31, 1977, where he played in 39 games during the regular season, and 5 playoff games, helping the Jets win the 1978 Avco World Trophy as WHA champions. Bromley later quoted - "I'll never forget that Jets team" - "We had guys like Bobby Hull, Anders Hedberg and Ulf Nilsson.

Bromley was then signed as free agent by the Vancouver Canucks, May 23, 1978, where he played parts of three seasons with the Canucks and rotated games with Glen Hanlon, Dunc Wilson, and Richard Brodeur. During this time, Bromley also played for the Canucks farm team, the Dallas Black Hawks of the Central Hockey League.

Bromley retired after spending the 1981-82 season with the New Haven Nighthawks of the AHL.

Bromley may be best remembered for his "Skull" mask which he wore during his years with the Canucks. The idea for the design came from his nickname, "Bones"