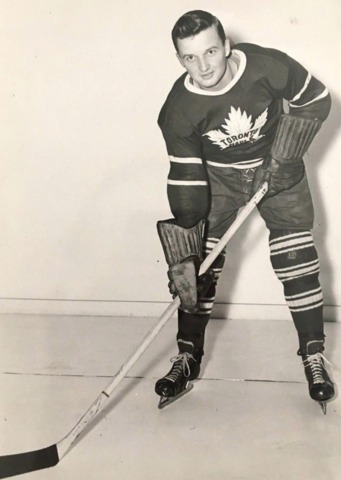 Bodnar started his career with his local Fort William Rangers of the Thunder Bay Junior A Hockey League / TBJHL. He played for the Rangers for three seasons from 1941–43 and competed for the Memorial Cup twice in 1941–42 and 1942–43.

After leading the TBJHL in points in 1942–43, Bodnar joined the Toronto Maple Leafs. On October 30, 1943, Bodnar scored his first ever NHL goal 15 seconds in his first NHL game, setting the record for fastest goal by a player in his first NHL game. The Leafs went on to beat the New Rangers 5-2 that night. Bodnar scored 62 points during the regular season, a career best, and he beat Montreal Canadiens rookie goaltender Bill Durnan in voting for the Calder Memorial Trophy in 1943–44. Bodnar had 40 assists in his rookie season, which would set a record for assists by a Maple Leafs rookie until surpassed by Mitchell Marner (42) in 2016–17.

Bodnar was part of the first Maple Leafs dynasty, helping the team win Stanley Cup championships in 1945 and 1947. Bodnar and linemates Gaye Stewart and Bud Poile, all natives of Fort William (Flying Forts line) along with Bob Goldham and Ernie Dickens, were traded to the Chicago Blackhawks on November 2, 1947, for Max Bentley and Cy Thomas.

Bodnar remained in Chicago for seven seasons from 1947 to 1954. He also played in the NHL All-Star Game in 1950–51. On March 23, 1952, the final night of that 1951-52 regular season, Bodnar set another NHL record by recording three assists in 21 seconds. With that record, he also helped teammate Bill Mosienko set the record for fastest hat-trick in NHL history.

On February 16, 1954, Bodnar was traded to the Boston Bruins for for Jerry Toppazzini. He would remain with the Bruins for one more season in 1954–55, before retiring.

After Bodnar retired from playing Hockey in 1955, he came back to coach. Bodnar coached in the Boston Bruins farm system with the Lakeshore Bruins in the Metro Jr.B league, they won the League Championship in 1957/58 and went to the OHA Jr.B Championship round.

Bodnar was the coach and manager of the Toronto Marlboros from 1967 to 1968. He coached the Marlboros to the Memorial Cup championship in 1967.

In 1970, Bodnar was named head coach of the Salt Lake Golden Eagles in the Western Hockey League / WHL. He remained there for two seasons before signing on as head coach of the Oshawa Generals in the OHA from 1971 to 1976.

He was the recipient of the OHA Coach of the Year Award, the Matt Leyden Trophy in 1971–72.

Gus Bodnar was elected to the Northwestern Ontario Sports Hall of Fame in 1983.

Gus Bodnar was Inducted into the Oshawa Sports Hall of Fame in 1995.