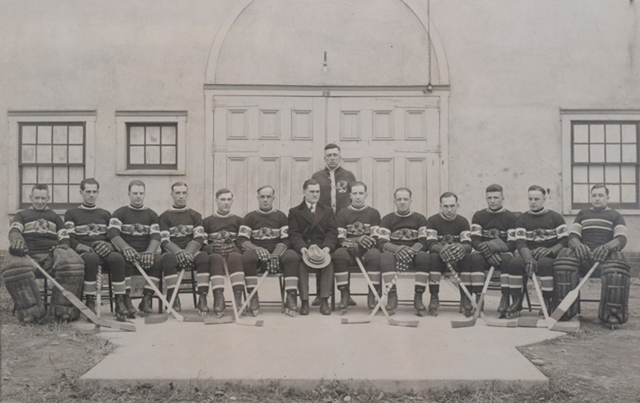 Montreal Canadiens Team Photo 1924 with "Globe Team Jerseys"
Photo taken outside the Grimsby Arena in Grimsby, Ontario prior to a exhibition game vs the Saskatoon Sheiks on November 19, at the start of the 1924 season.

“Some say it was the greatest collection of Hockey talent ever assembled on Grimsby ice,”

Beginning with the 1922/23 season the Canadiens held its preseason training camp in Grimsby. Their time training in Grimsby culminated with a Stanley Cup victory in 1924. In November 1924 the team returned to Grimsby as world champions. They brought with them new sweaters that sported a globe, signifying the team’s world championship status. Grimsby was the first place that the now-famous globe logo was seen.

Grimsby can also lay claim to being the site where future hall of famers Aurel Joliet and Howie Morenz had their first skates with the Canadiens.