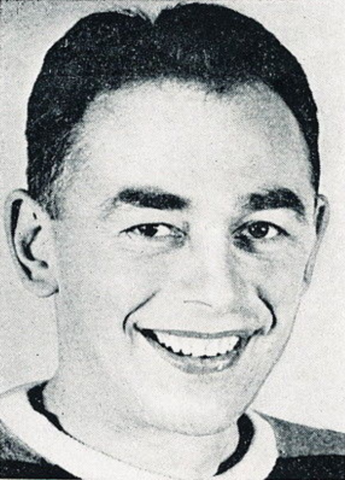 Hollett grew up in Toronto playing back yard rink Hockey and lacrosse as a child and teenager.

When Hollett was 20 years old, he was playing lacrosse with Lionel Conacher in Toronto. Leafs' owner and GM, Conn Smythe spotted him in action and said, "If you can play Hockey like you play lacrosse, we could use you in the International Hockey League (IHL) next winter!" Hollett accepted the offer.

Hollett made his NHL debut with the Toronto Maple Leafs early in the 1933-34 season, playing 4 games before being loaned to the Ottawa Senators on January 2, 1934 for the remainder of the season. Hollett played 30 games for the Senators, scoring 7 goals and 4 assists. Hollett also played 13 games for the IHL Buffalo Bisons during this season, scoring 5 goals and 4 assists.

Hollett was now dubbed "Flash" because of his swift skating stride and strong puckhandling ability.

Hollett would rejoin the Maple Leafs for the 1934-35 season, scoring 10 goals and 16 assists in 48 games, and would start the next season in Toronto, was sent down to the IHL Syracuse Stars for 4 games, before being sold to the Boston Bruins on January 15, 1936 for $16,000. At the time one of the highest prices ever paid for a player. Hollett had wore out his welcome matt with Conn Smythe. His abrasiveness would come into play throughout his career.

It was in Boston where Hollett established himself as a solid NHLer. Teamed mostly with Eddie Shore, Hollett would enjoy 7 seasons with the Bruins.

Hollett would lead all NHL defensemen with 27 points in the 1938-39 season, as the Bruins were the league's best team in the regular season, and Hollett was a key player in the 1939 playoffs, scoring a goal and 3 assists in 12 games, as the Bruins would win the 1939 Stanley Cup championship vs his old team the Maple Leafs.

Hollett would again lead NHL defensemen in points the next season with 10 goals and 18 assists, but the Bruins lost to the New York Rangers in the Stanley Cup semi finals.

The 1940-41 Bruins iced essentially the same team that had won the title in 1939, minus Eddie Shore who was traded to the New York Americans in exchange for forward Eddie Wiseman. With a better showing in 1940 this Bruins team may have been held in better esteem in the eyes of history. Even as it is, they should rank among the best teams ever. Hollett had a decent regular season with 9 goals and 15 assists, and was the leader in Play-off Points among Defensemen with 3 goals and 4 assists, as the Bruins won the 1941 Stanley Cup championship with a 4 game sweep of the Detroit Red Wings.

In the 1942-43 season, Hollett did break Tom "Cowboy" Anderson's record for most points by a defenseman with 44, scoring 19 goals and 25 assists, after which he was named to the league's Second NHL All-Star Team.

During these years, Hollett clashed with boss Art Ross. It was once said that Art Ross toyed with the notion of burying him in the minor leagues. Despite the feud, Ross knew he needed Hollett. He was an extraordinary offensive presence from the rear and he had great versatility. Ross would move Hollett up on a forward line whenever a forward got hurt. Hollett would also take turns as a forward while on the penalty kill.

Hollett was on pace for another near-20 goal season, when on January 5, 1944 the Bruins traded away the now 32 year old veteran to the Detroit Red Wings for Pat Egan, a young defensive prospect.

In Hollett's first full season with Detroit, he was named team captain, and he would break Cameron's goal record by defensemen. He scored 20 goals and 21 assists in the 1944-45 season. What makes this even more unthinkable is that he did this in 50 game schedule. The record of 20 goals would stand for 24 years until a young man named Bobby Orr came along. Hollett was also named to the NHL First Team All-Star in 1945.

Hollett's production faltered significantly in 1945-46 as he battled groin and knee injuries and had a falling out with Red Wings boss Jack Adams. The argument was over Flash's contract. Hollett wanted a $500 a year raise and even retired in the summer of 1946 over the dispute. When he did retire Adams threatened Hollett that he would make sure that Flash would never be placed in Hockey's Hall of Fame. Suspiciously, even years after Jack Adam's passing, Hollett, one of the games top blue liners of that era is still not in the Hall.

Hollett was traded to the New York Rangers on June 19, 1946 for Ab DeMarco and Hank Goldup. The transaction was voided when Hollett decided to retire, following his wife's wishes to live closer to home in Ontario.

Hollett returned to the Toronto area and played for five more seasons in senior leagues, with the Toronto Staffords, Kitchener Dutchmen and the Toronto Marlboros, which he led to the 1950 Allan Cup championship, scoring 5 goals and 12 assists in the playoffs, his last in organized Hockey.

Hollett retired having scored 132 goals and 181 assists for 313 points in 565 NHL games; at the time of his retirement, he was the highest scoring defenceman in league history. In 79 NHL playoff games, he added 8 goals and 26 assists for 34 points.