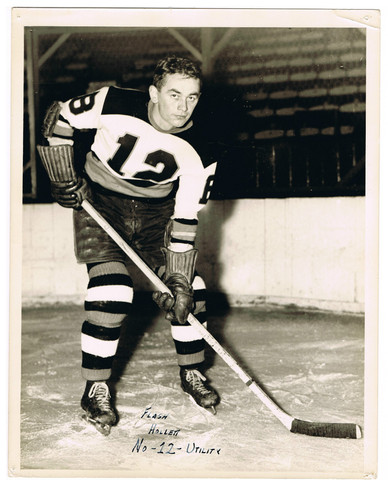 Flash Hollett - Frank William Hollett (April 13, 1912 in North Sydney, Nova Scotia – April 20, 1999 in Mississauga, Ontario), was a Canadian Professional Ice Hockey defenceman who played 13 seasons in the National Hockey League / NHL for the Toronto Maple Leafs, Ottawa Senators, Boston Bruins and Detroit Red Wings - Known for his swift skating stride and strong puckhandling ability, Hollett became one of the top offensive defencemen of his day. He played for eight seasons in Boston, and was a star defenceman on the Bruins' Stanley Cup championship teams of 1939 and 1941. In 1942, he set a record for goals by a defenceman with 19, a mark he tied the following season, after which he was named to the league's Second All-Star Team.
Hollett was traded to the Red Wings midseason in 1944, and the following year broke his own mark for goals in a season by a defenceman with 20, en route to a citation on the league's First All-Star Team; this record would stand for a quarter-century before being surpassed by Bobby Orr - After his record-setting season, Hollett's offensive numbers declined sharply in 1946, with the previously war-depleted NHL regaining many former stars. In the wake of an acrimonious contract dispute with Detroit general manager Jack Adams, he was traded to the New York Rangers, but following his wife's wishes to live closer to home in Ontario, Hollett retired from the NHL -
He played for five more seasons in senior leagues, most notably for the Toronto Marlboros, which he led to the Allan Cup in 1950, his last in organized hockey. He coached the Marlboros for a single season in 1951, recording a 19–12–1 record -
Hollett retired having scored 132 goals and 181 assists for 313 points in 565 NHL games; at the time of his retirement, he was the highest scoring defenceman in league history. In 79 NHL playoff games, he added 8 goals and 26 assists for 34 points.