Gilles Villemure of the Buffalo Bisons walking to the ice 1970 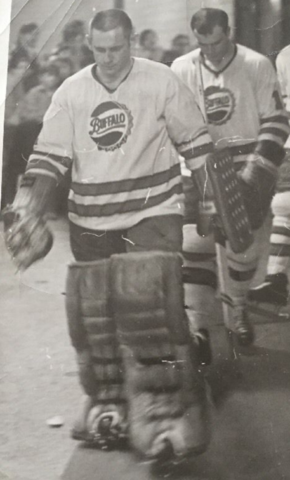 Gilles Villemure of the Buffalo Bisons walking to the ice 1970.

in each of his final two seasons in the AHL (1968-69 and 1969-70), Villemure won the Les Cunningham Award with the Bisons as the league's most valuable player, leading all goaltenders in the playoffs the second year to backstop the Bisons to the 1970 Calder Cup championship in their final season.

During his minor league career, he led his league in goals against average three times and in shutouts five times.

The Buffalo Bisons were an American Hockey League ice Hockey franchise that played from 1940 to 1970 in Buffalo, New York. They replaced the original Buffalo Bisons Hockey team, which left the area in 1936 after its arena collapsed. They were the first professional Hockey team to play their games in the Buffalo city proper; the previous team had played across the border at an arena in Fort Erie, Ontario.

The Bisons played at the newly constructed Memorial Auditorium, and at various times had affiliations with the Montreal Canadiens, Chicago Black Hawks and New York Rangers.

The team's unusual bottle cap logo stems from the Bisons being purchased in 1956 by the owner of the local franchise of Pepsi-Cola, who changed the team's colors and logo to reflect the soft drink company; the Bisons retained the logo for the rest of their existence.
They were Calder Cup champions in ~~1943, 1944, 1946, 1963 and 1970.

The team ceased operations after the 1969–70 season due to the awarding of a National Hockey League expansion team, the Buffalo Sabres, to begin play in 1970–71.