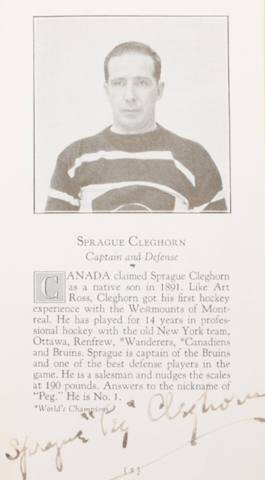 The Montreal native attended Westmount Academy as a young man. Here, at the age of 15, he first crafted his reputation as an extremely tough competitor. Between 1906 and 1909, he played with several amateur Hockey teams in the city before spending the 1909-10 season with the New York Wanderers in the United State Amateur Hockey Association and registered seven goals in eight games.

Having been scouted by the Renfrew Creamery Kings in the National Hockey Association / NHA, he was signed to a contract, along with his brother Odie, to play with them for the 1910–11 NHA season. Sprague appeared in 12 games, scored five goals and registered 27 penalty minutes. During the season, he also made the conversion from the position of winger to defence, as his coach, Alf Smith, felt his presence was better in that position. At this time Cleghorn was heavily influenced by his teammate Fred "Cyclone" Taylor. Cleghorn rushed forward with the puck in much the same fashion, and was one of the earliest incarnations of an offensive defenseman.

The 1911-12 season brought Cleghorn back to his hometown to suit up for the Montreal Wanderers. His end-to-end rushes and cantankerous defensive play rapidly endeared him to the Montreal fans. The bruising star came to be known simply as "Peg" by his adoring public.

With the Wanderers he established a reputation that he would later be most remembered for, that of a fierce competitor with an explosive temper. He was also an offensive leader for the Wanderers; Cleghorn frequently carried the puck the length of the ice surface to generate scoring chances: on December 27, 1913 game he had a five goal game against the Toronto Hockey Club, and during the 1914–15 season he led the NHA with 12 assists as part of a career year in which he also scored 21 goals.

Cleghorn would often violently retaliate to opposing players he felt were taking liberties on his teammates, especially on his brother Odie. One particular incident in 1912 saw him strike opposing player Newsy Lalonde in the back of his head after the latter had cross-checked Odie. This resulted in a fine and suspension from the league. He also faced a charge of aggravated assault for which he paid a $50 fine. In a January 1917 game against the Toronto Blueshirts, Cleghorn collided with Ken Randall, which subsequently led to a violent foot-first collision with the boards. He sustained a broken ankle that ended his season. While recovering from his injury later in 1917, Cleghorn suffered another fall while walking an icy street in Montreal and fractured his other ankle. The injuries forced him to miss the entire 1917–18 season, and cast doubts on his future in Hockey.

Cleghorn stayed with the Wanderers until the franchise's arena burned down in 1918, whereupon Cleghorn's rights were claimed in a dispersion draft of the Wanderers team by Ottawa Senators general manager Tommy Gorman, who had also paid for Cleghorn's transportation to Ottawa. After recovering from his leg injury, he played for the Senators in 1918–19 and registered 13 points in 18 games.

The next season, Sprague played on a defensive pairing with Eddie Gerard and scored 21 points in 21 regular season games, as well as one point in five playoff games. That season the Senators went on to win the NHL playoff championship, and the the 1920 Stanley Cup, defeating the Seattle Metropolitans.

In an attempt at league parity, the NHL transferred Cleghorn to the Hamilton Tigers in December 1920, but Cleghorn refused to report. The Senators asked that he be allowed to return to their team, for which George Kennedy, owner of the Montreal Canadiens, threatened to have Ottawa thrown out of the league. Cleghorn eventually signed with the Toronto St. Patricks, playing with them for the regular season in which the team won the NHL's second half championship. With the management growing discontent with his play, he was eventually released from the club in March after the St. Pats lost their playoff series vs Ottawa. He was then returned to the Senators for their playoff series vs the Vancouver Millionaires in the Stanley Cup final, where he had 2 assists in game 2, including assisting on the game winner, then scored the game 3 winner, as the Canadiens won the 1921 Stanley Cup championship in 5 games (3-2).

The league again attempted to transfer Cleghorn to Hamilton in 1921, but he again refused to report. Just before the start of the 1921–22 NHL season, Hamilton traded him to the Montreal Canadiens for Harry Mummery and Amos Arbour.

With the Canadiens, Cleghorn was reunited once again with his brother, Odie. In his first season with the Canadiens, he scored 17 goals and nine assists for 26 points in 24 games. Towards the end of the season, he would also be named captain of the team. For the next three seasons, the Canadiens made the Stanley Cup playoffs three consecutive times. He played alongside Billy Coutu, and the pair established a reputation as one of the most feared defensive parings in the league. In a 1923 playoff series, against his former team, the Ottawa Senators (who he had grown to despise), Cleghorn struck Ottawa Senators defenceman Lionel Hitchman in the head with his stick. Later charged with aggravated assault, he was found guilty and fined $50. The incident also enraged Canadiens owner, Leo Dandurand, who suspended him from the roster for the remainder of the playoffs. In a separate incident versus the Senators in 1922, he initiated a brawl during which he injured three players: Eddie Gerard, Frank Nighbor and Cy Denneny. This led to an attempt by the Ottawa management to expel him from the league, and a referee to describe him as a "disgrace to the game".

In the 1923–24 season, Cleghorn had another solid year with 8 goals, 4 assists, then helped Montreal win the 1924 O'Brien Trophy as NHL playoff champions. Cleghorn, the team captain then had 1 goal, 1 assist in game 1 of the Stanley Cup final, and another assist in game 2, as Montreal defeated the Calgary Tigers in 2 straight games to win the 1924 Stanley Cup championship, their first in the NHL era.
It was the third Stanley Cup championship of Sprague Cleghorn's career.

Cleghorn had another good season in Montreal for the 1924-25 season, in which Montreal won the 1925 O'Brien Trophy as NHL playoff champions, but lost to the Victoria Cougars in the Stanley Cup finals.

After the season, Montreal sold him to the Boston Bruins for $5000.

Cleghorn played out the following three seasons with the Bruins until his retirement in 1928. Cleghorn acted as the unofficial captain of the Bruins between 1925 and 1927, and in his final season with the Bruins, 1927–28, also served as an assistant coach. During his time with the Bruins, he served as a veteran presence on the team, as well as a mentor to future Hall of Fame defenceman Eddie Shore.

After his retirement, Cleghorn took to coaching. He first found a job with the Newark Bulldogs of the Canadian-American Hockey League / Can-Am where he acted as a player-manager from 1928 to 1929. During his time with Newark, Cleghorn acquired his former Montreal teammate, Billy Coutu, to play for the team for the season as his defensive partner. A newspaper at the time stated that the move "reunited the most formidable defence that ever played Hockey".

Later, he coached the CAHL's Providence Reds in the 1930–31 season. The following year he was named head coach of the NHL's Montreal Maroons for the 1931–32 season. That season, the team racked up 19 wins and 22 losses, for third in the Canadian Division and a spot in the Stanley Cup playoffs. The team would advance to the playoff semifinals where they were eliminated by the eventual champion Toronto Maple Leafs.

Cleghorn was hired in 1935 by the Pittsburgh Shamrocks of the International Hockey League / IHL, but was fired by the team near the end of his first season over a dispute with club president Ray Babcock over the payment of his salary. He was replaced by Albert Hughes, the team's captain, for their 11 remaining games. According to media reports, Cleghorn refused to leave with the team for a game in Windsor because he claimed that the team had not been paid three days earlier. However, the Shamrocks' ownership stated that the reason Cleghorn did not accompany the Shamrocks team on their trip, was because he had to be disciplined for "misconduct covering the past month". On March 14, 1936, Cleghorn filed a lawsuit against the Shamrocks ownership, claiming that he was owed $1,420.50 by the club. The ex-coach claimed that he was owed $420.50 in salary since March 2, and a $1000 bonus, covered by his contract.

His final coaching stint was with the Cornwall Cougars of the Quebec Provincial Hockey League. He was appointed to the position September 30, 1947, and served for a little over a month. After his team went winless in their first six games and having just suffered an 11-0 home defeat, he was fired on November 14.

Over his 16-year career in the NHA and the NHL, Cleghorn accumulated 170 goals, 89 assists (including playoffs) mostly from the defense position. At the time of his retirement he trailed only Harry Cameron among defenders on the all-time scoring list in the pro leagues. His goal contribution and intense competitive nature with a violent temper were key components to the success of every team he played on.

Cleghorn claimed to have been involved in at least 50 incidents during his career in which a player left the ice on a stretcher. In the season which Ottawa unsuccessfully attempted to have him banned from the NHL, Cleghorn led the league in penalty minutes with 80.

According to some accounts, Evelyn Byng, Viscountess Byng of Vimy, was so mortified by Cleghorn's style that she donated the Lady Byng Trophy to the NHL in 1924 in a bid to encourage more sportsmanlike play.