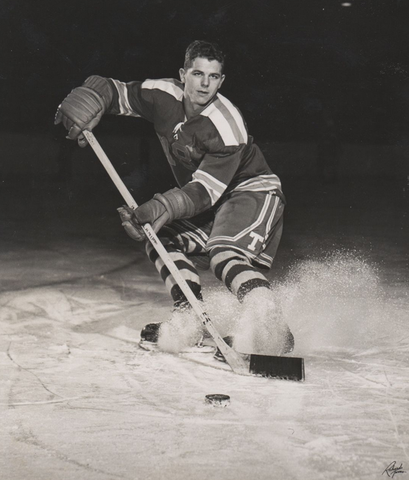 Nicknamed "The Weiner," Brown was born in a small town near Belleville, called Deloro, Ontario. He played three years of major Junior A hockey with the OHA's St. Catharines Teepees. In his rookie season, Brown played in 46 games, scoring nine goals and 22 points. He improved to 40 points the next year and had a very solid final year in 1950-51, providing 29 goals and 52 assists in 51 games.
Brown turned pro in 1951-52, signing with the Tacoma Rockets of the PCHL. In 70 games, he scored 28 goals and 58 points. He remained with Tacoma for another year and played one season in Seattle before being rewarded with a call-up to the Boston Bruins in 1953-54, where he appeared in four post-season games. Brown never did play a regular season NHL contest, but was in the lineup for the four playoff games. He was used primarily as insurance, in case one of the main roster players was injured, so his playing time was limited.

For three years Brown wore the sweater of the Victoria Cougars of the WHL and then played before his hometown fans for two seasons in Belleville with the McFarlands of the Eastern Ontario Hockey League in 1958 and 1959.

Brown was a member of the Belleville McFarlands when they won the Allan Cup in 1958 and the World Championship in 1959.

Other stops along the way included a stint with the Clinton Comets, the Syracuse Stars and the Belleville Mohawks. Brown played one OHA senior game in 1972 at the age of 42, with the Belleville Quintes.