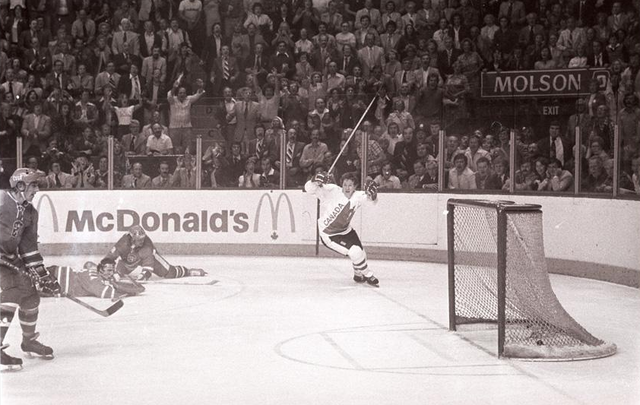 At the Montreal Forum on September 15, game 2 in the best of 3 Canada Cup championship went into overtime. During the second half of the 1st overtime period, Darryl Sittler received a pass from Marcel Dionne as he skated into the Czechoslovakian zone close to the side boards. As Czech goalie Vladimír Dzurilla came out to challenge, Sittler faked a shot that froze the goaltender, took two more strides then fired the puck into an open net.

The goal touched off a wild celebration amongst the Canadian players on the ice and the 18,040 fans in the stands at The Forum.

Sittler's championship winning goal remains one of the most famous in Hockey history.

The tournament finale was the most watched television event in Canadian history at the time. 10,700,000 people were estimated to have watched the game, representing nearly half of all Canadians in 1976.

The team that represented Canada is still considered one of the greatest national teams to ever represent the nation in a Hockey tournament. 17 of the 25 players on the roster would later be elected into the Hockey Hall of Fame.

For many players, winning the Canada Cup was the highlight of their careers. Bobby Orr and Lanny McDonald both rated winning this tournament ahead of winning the Stanley Cup.

The Canada Cup was the first true best-on-best world championship in Hockey history as it allowed any player to represent their national team regardless of amateur or professional status. Consequently, it marked the end of Canada's six-year boycott of the IIHF.

The success of the event paved the way for greater use of professional players in the World Championship and Winter Olympics.