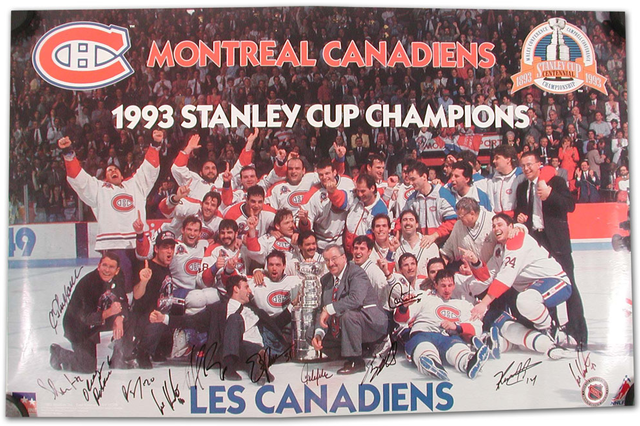 The 1993 Stanley Cup Final series was contested by the Los Angeles Kings and the Montreal Canadiens to decide the NHL championship for the 1992–93 season. It was the first appearance in the Final for the Kings, and the 34th for Montreal, their first since the 1989 Final. The Canadiens won the series four games to one to win the team's twenty-fourth Stanley Cup.

Montreal goaltender Patrick Roy won the Conn Smythe Trophy as the most valuable player of the Stanley Cup Playoffs for the second time (he won it for the first time in 1986).

This would be the last Stanley Cup Final series to be played in the Montreal Forum, and the last time Wayne Gretzky would play in the Finals as well. Gretzky was trying to become the first player to captain two teams to the Stanley Cup, having led the Edmonton Oilers to Stanley Cup championships in 1984, 1985, 1987, and 1988. It was Montreal's first trip to the Finals since 1989, when they lost to the Oilers' provincial rivals, the Calgary Flames. Meanwhile, it was the first-ever trip to the Finals for the Kings in their 26-year history.

The 1993 Montreal Canadiens are also the last Stanley Cup championship team to be composed solely of North American-born players.