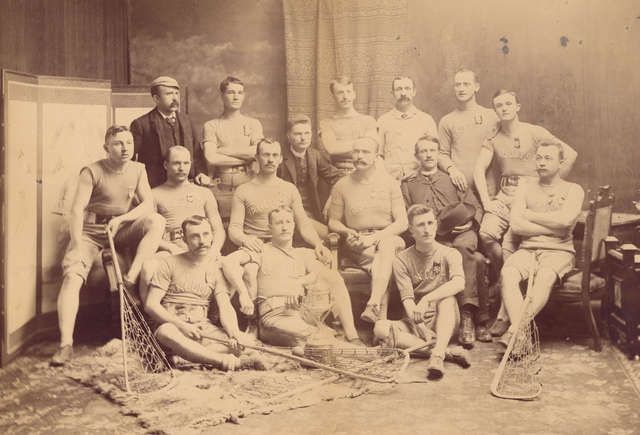 Vancouver Lacrosse Club was formally organised in 1888. The first practices were held on the sawdust at the Hastings Mill yard but it soon became apparently that more suitable playing grounds were required. Through the efforts of Al Larwill, AE Beck, and CG Johnson work began on clearing the Cambie Street grounds which became the first home for athletic clubs in the city.

First surveyed and assigned for athletics and sporting pastimes in the 1880s, the Cambie Street grounds were not that well-maintained and deemed unsatisfactory for sporting events well before the time professional lacrosse reached its glory years. The grounds took up the entire city block bounded by Cambie, Dunsmuir, Beatty and Georgia Streets.

In its early years, it could be leased from the Canadian Pacific Railroad for $5 per annum and cows and goats were kept on the grounds as a means to trim the grass. The grounds played host to Vancouver’s first sports event, a rugby game in 1887. Actual lacrosse games at the senior level were only played on the Cambie grounds in 1891, with three matches recorded as being played there.

Alfred ‘Al’ Larwill had a shack on the grounds and lived there as a sort of unofficial caretaker from the time after the great fire of 1886 until 1902 when he was ordered to move so the site could be renovated. Larwill passed away on April 2, 1911.

The Cambie Street grounds were renamed Larwill Park in 1943 in memory of the old caretaker.

During the Second World War, the grounds were re-developed and Larwill Park became a bus depot for long-distance buses in 1946. The Greyhound Bus Lines depot remained there until 1993 when it was demolished sometime afterwards. Currently the block is occupied by a parking lot.