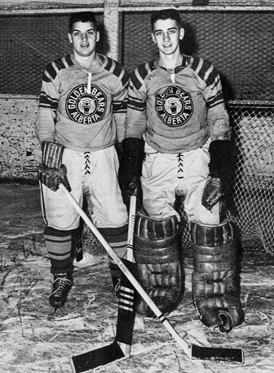 Joseph Kryczka, or "Justice Joe" as he is fondly known, has been a player, coach, referee, and administrator of hockey throughout his life. He played his minor years in Coleman and his intercollegiate years with the University of Alberta Golden Bears. He coached and refereed in numerous leagues between 1959 and 1963 before becoming involved as an executive member of the Alberta Amateur Hockey Association. He also served in numerous positions with the Canadian Amateur Hockey Association including terms as President from 1971 to 1973. Joseph Kryczka is well known for his prominent role in negotiating the 1972 Canada Cup Series that was played between Canada and the Soviet Union. He has been recognized as the 1973 Air Canada Amateur Sports Executive of the Year, and as a life director and/or life member of the Calgary Booster Club, Alberta Amateur Hockey Association and the Calgary Olympic Development Association.