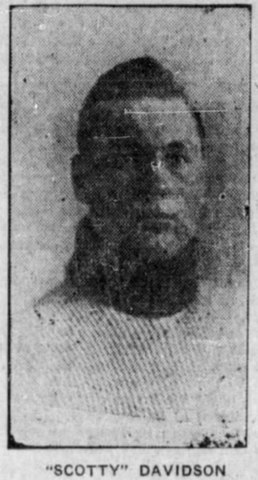 Scotty Davidson was a Kingston, Ontario product and came up through the junior ranks of the Kingston Frontenacs and played in the junior section of the Ontario Hockey Association (OHA) during the 1909–10 and 1910–11 seasons.

While with the Calgary AC in the Southern Alberta Senior Hockey League (SASHL) in 1911–12 "Scotty" Davidson played on defense. The next season, in 1912–13, he found himself on the right wing with the Toronto Blueshirts in the National Hockey Association (NHA).

In 1913–14 Davidson captained the Blueshirts to the Stanley Cup, defeating the Montreal Canadiens in a playoff series for control of the trophy. The Blueshirts then also defeated the Victoria Aristocrats of the PCHA in an informal/unofficial challenge for the Stanley Cup.

Davidson enlisted with the Canadian military forces and died in WW1 on June 16, 1915 while fighting in Belgium.

He was inducted posthumously into the Hockey Hall of Fame in 1950.