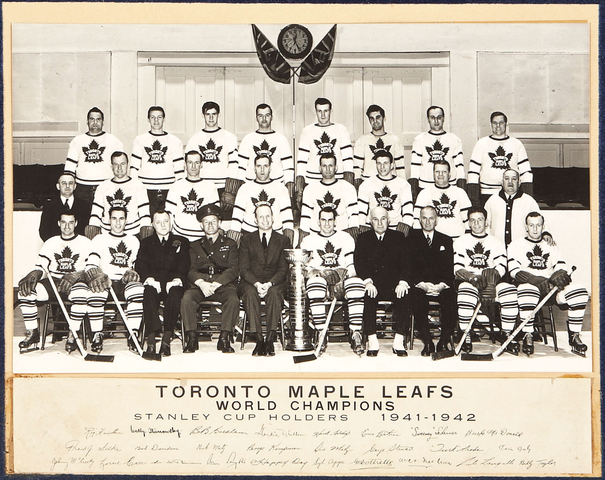 This was the series of the remarkable comeback.

Toronto came back from a 3–0 deficit to win the best-of-seven Stanley Cup Final.

The feat has not been duplicated since in Stanley Cup play.

It was the first Stanley Cup Final in history to go seven games.

The first game was held in Toronto. Detroit's Don Grosso opened the scoring in the second minute before John McCreedy tied it for Toronto. Sid Abel put the Wings ahead, only to have Sweeney Schriner tie it to leave the teams tied after the first period. Grosso scored again at the 14:11 mark of the second and the Wings held off the Leafs from there to win the opening game 2–1.

Detroit took the second game in Toronto by a score of 4–2. Don Grosso scored two goals again for the Red Wings. The Wings took the lead 2–0 after the first period on goals by Grosso and Mud Bruneteau. Schriner scored in the second for the Leaf to close the score to 2–1 after two periods. Grosso scored early in the third along with Gerry Brown to put the Wings ahead 4–1 before Wally Stanowski scored in the fifteenth minute for the Leafs. Detroit held off the Leafs from there to take the series lead 2–0.

In game three in Detroit, the Maple Leafs took an early 2–0 lead on goals by Lorne Carr, but the Wings evened the score before the end of the first period on goals by Gerry Brown and Joe Carveth. Late in the first period, Sid Abel had to leave the game with a possible fractured jaw. His replacement, Pat McReavy, scored the winning goal early in the second, and Syd Howe added another to put the Wings up 4–2 after two. Eddie Bush scored for the Wings in the third to push the final score to 5–2

In the fourth game, held in Detroit, the Maple Leafs staved off elimination with a 4–3 victory. Toronto coach Hap Day pulled Gordie Drillon and Bucko McDonald, replacing them with Don Metz and Hank Goldup. There was no scoring in the first. Bruneteau and Abel scored to put the Wings ahead 2–0 before the second period was half over. The Leafs tied it up on goals by Bob Davidson and Carr to leave the teams even after two periods. Carl Liscombe scored in the fifth minute of the third to put the Wings ahead, but two minutes later Syl Apps tied it up. Nick Metz scored the winning goal for Toronto with seven minutes to play.
The game ended in a near-riot. In the final minute, Detroit's Eddie Wares drew a misconduct penalty and then a $50 fine for arguing and refusing to leave the ice. Referee Mel Harwood dropped the puck for the faceoff while Wares was still on the ice and promptly called a too-many-men penalty on Don Grosso. Grosso threw down his stick and gloves and was fined $25 by Harwood. At the end of the game Detroit coach Jack Adams then attacked Harwood, punching him in the face following an profanity-laced outburst. The fans booed the officiating, littering the ice with paper and peanuts and even a woman's shoe. NHL president Frank Calder and referee Harwood were escorted out of the rink under police protection. Calder immediately suspended Adams indefinitely and imposed $100 fines on Grosso and Wares.

The teams returned to Toronto for the fifth game. Ebbie Goodfellow took over the coaching duties for the suspended Jack Adams. Leafs' coach Day had worked out Drillon and McDonald but chose to leave them out and his decision was vindicated. The game was a mismatch as the Leafs won 9–3 behind three goals and two assists from Don Metz. Nick Metz scored the first goal and Stanowski scored a second to put the Leafs ahead 2–0 after one period. In the second period, the Leaf scored five goals. Bob Goldham, followed by Schriner, Don Metz, Apps and Don Metz again raised the score to 7–0 after two. In the third period, Howe put Detroit on the board but Don Metz and Apps scored before Alex Motter and Carl Liscombe scored for the Red Wings to finish the scoring.

Game six presented a chance for Detroit to win the Cup on home ice. Although the team had lost the momentum of the series, the Detroit players promised it would be a different outcome from game five, especially the first period, where the Wings had drawn penalties leading to two power-play goals by the Leafs. The teams both showed a lot of discipline in the game and no penalties were called. The closest to an incident came in the third period when Jack Stewart of the Wings and Bingo Kampman of the Leafs collided and almost came to blows. At that time a fan threw a three-pound perch to the ice.
The first period was described as "hard-hitting Hockey" and the teams ended the period scoreless. Just 14 seconds after the start of the second, Don Metz stole the puck near the Detroit goal and beat Johnny Mowers to put the Leafs ahead. Turk Broda held off the Red Wings for the rest of the game to record the series' only shutout. Goldham and Billy Taylor scored goals 32 seconds apart late in the third period to clinch the game for the Maple Leafs, who now were being considered the favourites to win the series in the seventh game.

The seventh and deciding game was again a close game. Detroit survived a two-man disadvantage in the first period and the teams finished the period tied at zero. Detroit's Syd Howe opened the scoring in the second period on a pretty passing play between Abel, Jimmy Orlando and Howe. The Wings were determined to protect the lead and led after two periods 1–0. Toronto got its chance in the third period to tie the score when Orlando drew a tripping penalty on Apps. Just as the penalty expired, Schriner scored for Toronto in a goalmouth scramble to tie the game. After the goal, Toronto picked up the pace, eventually out-shooting Detroit 16–7 in the third. Pete Langelle scored the series winner two minutes later in another goalmouth scramble. Schhriner scored the third goal for the Leafs at the 16:13 mark to close out the scoring and the unprecedented comeback win was complete.

It was the first time a crowd of over 16,000 attended a Hockey game in Canada. 16,218 fans squeezed into Maple Leaf Gardens and remained for an hour after the game waiting for the Leafs to reappear from the dressing room after the game. Coach Day, who had played for the Leafs in their last win in 1932 deadpanned "We won it the hard way." He was asked if he had any doubts during the series, and replied "I had my doubts right up until that final bell rang." Rookie Gaye Stewart, who had joined the club for the fifth game of the final, became the youngest player to win the Stanley Cup as he was still 18 years of age. John McCreedy completed his triple championship with the win. He was a member of the Winnipeg Monarchs' 1937 Memorial Cup win and won an Allan Cup with the Kirkland Lake Blue Devils.