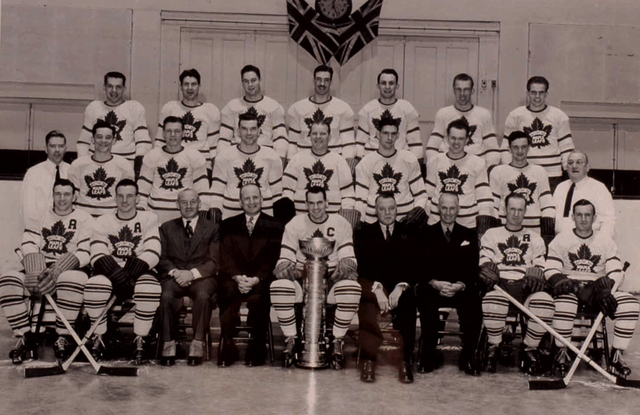 Ted Kennedy was the leader with three goals including the Cup winner. Toronto had several new players in its lineup, including Howie Meeker, Bill Barilko and Bill Ezinicki, as Toronto sported the youngest NHL team to win the Cup to that time.

The series continued a competition that had gone on all season, with Montreal and Toronto finishing 1-2. Montreal coach Dick Irvin was mad at the beginning the series, recalling a season-ending injury to Montreal forward Elmer Lach from a body check by Don Metz. Montreal started out strong in the series, defeating the Leafs 6-0 in the opener. Bill Durnan of the Canadiens reputedly said "How did those guys get in the league?", although he denied saying those words later.

The second game was a rough game, with Rocket Richard knocking two Leafs out with high-sticks to the head. Richard earned himself over 20 minutes in penalties and a game misconduct and a suspension for game three. The Leafs took advantage of the power plays and defeated Montreal 4-0. Richard would earn himself a further $250 fine imposed by president Clarence Campbell.

Games three and four were played in Toronto and Toronto won both to take a 3-1 series lead. Returning to the Forum for game five, Montreal won the game to extend the series. In the sixth game, Turk Broda showed outstanding goaltending, holding off Ken Reardon on a late break-away and the Leafs won 2-1 to win the Stanley Cup.

After the sixth game ended, the Cup was not presented to the Leafs. Clarence Campbell declined to present the Cup immediately, concerned over the spectre of fan violence.

NOTE - This was the final year of the "Stove Pipe" Stanley Cup, as it was named because of it's shape.