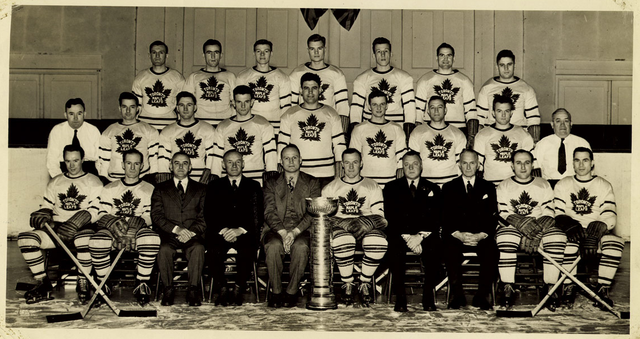 The 1945 Stanley Cup Final was a best-of-seven series between the Detroit Red Wings and the Toronto Maple Leafs. The Maple Leafs won the series by 4 games to 3.

For the first time, two rookie goalies met in a Stanley Cup last round. 18-year-old Harry Lumley was in net for the Wings and the Leafs had 26-year-old Frank McCool replacing Turk Broda, who was doing army service.
McCool, whose surname belied his jumpy demeanor, had been discharged from the army himself with stomach ulcers, but despite his medical condition, he would win the Calder Trophy. And he did not allow second-place Detroit, who'd gone 8–1–1 against third-place Toronto that season, a goal until just past the two-minute mark of the fourth game. His three-in-a-row zeroes were a postseason record that would not be repeated for 58 years, and the Leafs sat on the brink of a four-game outbroom.

The Maple Leafs won the Cup in game seven against the Red Wings by a final score of 2–1, but after the game, the Detroit crowd chanted, "We want Lumley!" and the dejected goalie was brought back to the ice from the dressing room while Toronto celebrated. Lumley would go on to a Hockey Hall of Fame career and McCool would play just 22 more games in the NHL, as January 1946 brought Broda back.