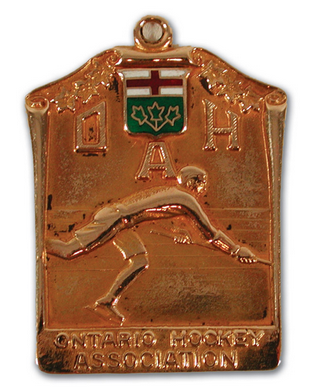 Presented to Harvey "Busher" Jackson in 1929 after he and fellow future Hall-of-Famer Charlie Conacher led the Toronto Marlboros to the Canadian junior hockey title, defeating the Elmwood Millionaires in the finals. Coached by Frank Selke and captained by Conacher who scored the Cup-winning goal, the Marlies received fabulous gold medals to commemorate the championship. Measuring 1" x 1 1/2" and stamped "Bailey 10K" on the back, the medal is engraved "Junior Champions - Won By Marlboros - H. Jackson - 1929". The front includes a raised hockey player, "Ontario Hockey Association", "OHA" and an enameled coat of arms.