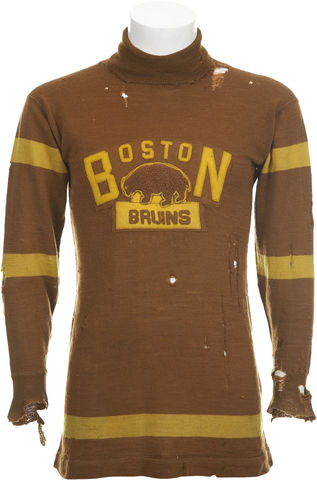 Boston Bruins Game Worn Sweater from First NHL Season. One of the most historically important and desirable Hockey artifacts ever to reach the public auction block, the presented brown wool sweater is believed to be the only surviving representation from the 1924-25 Boston Bruins, a team that holds the distinction of being the first NHL club to play its home games south of the Canadian border.

Though that debut season for the Boston Bruins was not a particularly auspicious one, the team claiming just six victories in thirty contests, the supreme relevance of this jersey is impossible to dispute. The start of the United States' participation in the world's most noteworthy professional Hockey league began with this very uniform top.

The presented sweater was issued to twenty-one year old left winger George Redding, who would net three pucks and assist twice in his twenty-seven games of activity.

The stunning turtle-necked relic exhibits the signs of rough play and decades of life, with numerous holes and fabric runs throughout, yet our catalog imagery should properly indicate that the aesthetics of the piece remain strong despite this. The magnificent felt and chenille logo patch on the chest is mercifully spared any significant defects, as is the charmingly amateurish application of Redding's number "10" in white felt on verso.