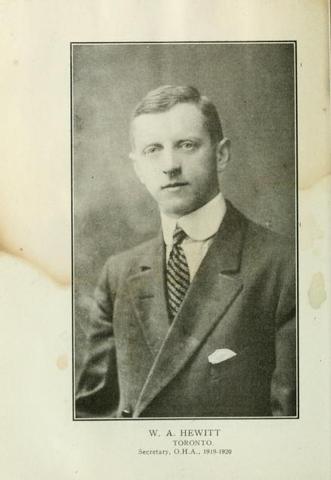 For 58 years, he served as secretary of the Ontario Hockey Association, taking the position on what was supposed to be a temporary basis in 1903, and holding it until stepping down in 1966 when he was in his mid-80s. He also served as an officer of the Canadian Amateur Hockey Association between 1915 and 1961.

Hewitt was honorary team manager of three consecutive Olympic gold medal winning hockey teams, the Winnipeg Falcons (1920), Toronto Granites (1924), and Toronto Varsity Grads (1928). He was also referee of the first Olympic hockey game, Sweden's 8-0 victory over Belgium at the 1920 Olympic Games. In 1924, he lost a coin toss to American William S. Haddock to determine who would be second vice-president of the International Ice Hockey Federation.