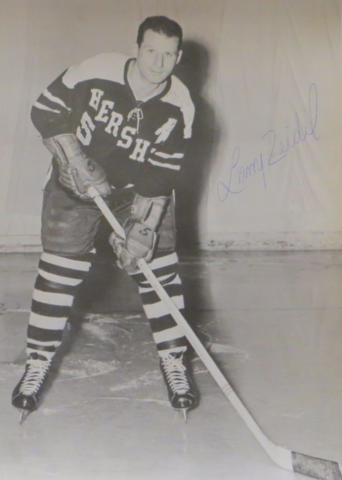 In his early years Zeidel played for Porcupine Combines (NOHA), Verdun Maple Leafs (QJHL), Barrie Flyers (OHA), Quebec Aces (QSHL) and Saskatoon Quakers (SSHL). It was during his days in Saskatoon that he picked up his nickname "The Rock".

Zeidel made his NHL debut during the 1951-52 season for the Detroit Red Wings. His start couldn't have been better. He immediately won the 1952 Stanley Cup championship with Detroit that year, playing in 5 playoff games.

The next year, Zeidel appeared in only nine games with the Red Wings and was traded to the Chicago Black Hawks prior to the 1953-54 season where he appeared in 64 games for Chicago.

Zeidel spent the next 13 seasons in the minor leagues, with the majority of his time with the Hershey Bears of the AHL where he won back-to-back Calder Cup championships in 1957-58 and 1958-59. He was also a member of the 1963-64 Calder Cup champion Cleveland Barons.

Zeidel made his way back to the NHL with the expansion Philadelphia Flyers, and played 57 games in the 1967-68 season along with another nine games the following season before he retired from professional Hockey after 18 seasons.