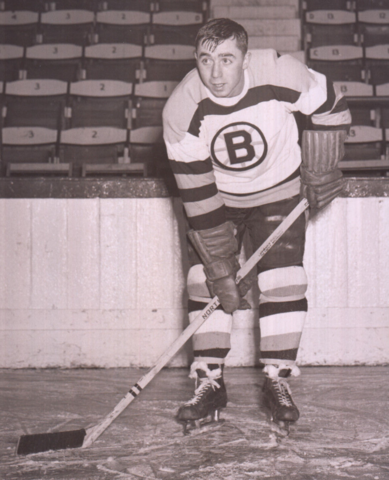 Fisher played with the Regina Abbots and the Regina Pats in the Saskatchewan junior circuit.

Fisher was the property of the New York Rangers and scored 59 points in 68 games in his first year as a pro with the AHL's New Haven Ramblers in 1947-48. At the end of that season he played one playoff contest for the Rangers when they lost in the semi-finals to the Detroit Red Wings.

Fisher scored 25 points in 60 games as a rookie playing on a line with Don Raleigh and Nick Mickoski. The hard-working forward enjoyed his finest year in 1949-50 when he played all 70 games for the Rangers and scored three goals while helping New York reach the Stanley Cup final.

A few games into the 1950-51 season, Fisher was sent to the Boston Bruins for Ed Harrison and Zellio Toppazzini. He played parts of three years in Boston and scored a career-high 15 goals in 1951-52.

Early in the 1952-53 season Fisher joined the AHL's Hershey Bears and became one of the most prolific scorers in the history of that franchise. Fisher hit the 40-goal mark in four of his six seasons and helped the team win the Calder Cup in 1958. In 1953-54 he set an AHL record with 13 game-winning goals. He also led the league with 41 goals in 1957-58 and was a first-team all-star that year. Fisher also garnered selection to the second team four straight years from 1954 to 1957.

After a nearly six-year hiatus from the NHL, Fisher was called up by the Detroit Red Wings to play eight games in 1958-59. Detroit had acquired his service from Boston in the off-season for Don Poile and Hec Lalande. Fisher starred for two more years in Hershey where won another Calder Cup in 1959 before retiring the following year.

Dunc Fisher was inducted into the Saskatchewan Sports Hall of Fame in 2001.

Dunc Fisher was inducted into the Hershey Bears Hall of Fame in 2014.