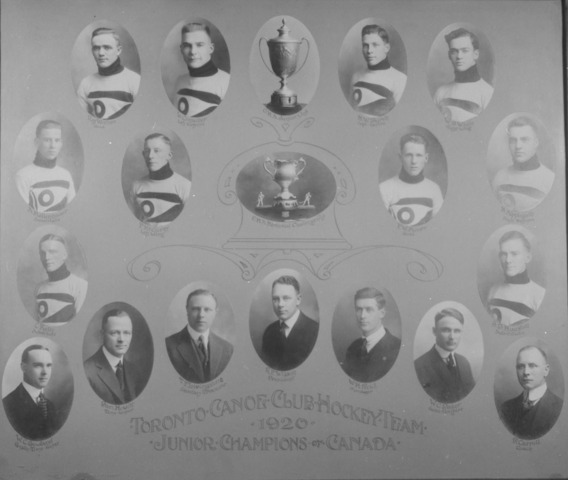 Before making the OHA Memorial Cup / Memorial Cup championship games, they lost 6-5 to the Stratford Midgets, a team that featured Howie Morenz, but then roared back with a 10-2 victory to win the two-game, total-goal affair, 15-8.

In the Memorial Cup championship series vs the Selkirk Juniors, here's how Winnipeg Free Press sporting editor W.J. (Billy) Finlay began his report after the series:
"After putting up a game battle for two periods, in which they displayed a lot of class against superior odds, Stan Kennedy's Selkirks faded badly in the final session, and were forced to submit to a 10-1 beating at the hands of Dick Carroll's hand-picked Canoe Club stars in the first game for the junior Hockey championship of Canada.”
In front of about 3,000 fans, the Paddlers led 2-0 and 3-0 at the period breaks.
"Starting off badly, when they appeared to be affected by stage fright,” Finlay reported, "the Fishtown lads finally caught themselves and were unlucky to be two goals down on the first session, and when they came back and outplayed their heavier and older opponents though outscored 1-0 in the second session, the 3,000 fans began to take notice, and cheered them loudly for their plucky work. But they had shot their bolt in their strenuous efforts in the second session, as they were badly outplayed in the final spasm, when the locals ran in six goals, mostly by fast combination play, in which the scorer worked in on top of the net.”

But Finlay pointed out that the Paddlers weren't too popular in the east.
"They are very unpopular here,'' he reported, "owing to the fact that they were picked up from different parts of the country and molded into one strong aggregation, and have such a big advantage over all the Ontario teams that they have killed interest in junior Hockey.”