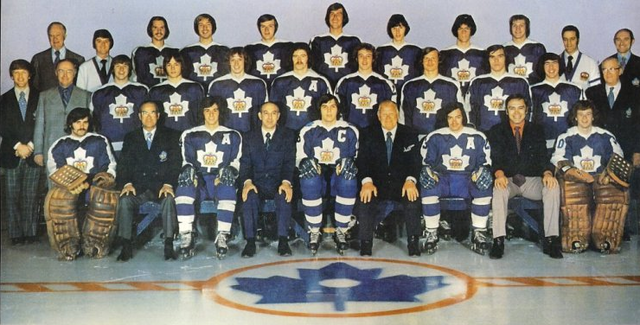 The Marlies counted a lot on goaltender Mike Palmateer, and their defence was led by big Bob Dailey and Marty Howe. Marty's brother, Mark, was the club's top left winger at just 17 years of age. Bordeleau, a speedy sniper, had been with the Montreal Junior Canadiens when they won the 1970 Memorial Cup. They also counted on Wayne Dillon and Tom Edur for scoring punch.
These Marlies had owned the Ontario junior league. In 63 games, they posted a record of 47-7-9 in becoming the first OHA team to reach 100 points. At one point, they put together a 25-game unbeaten streak. And they lost two consecutive games only once.
While doing all of this, the Marlies scored an amazing 416 goals while surrendering only 199.
“Yes, I guess you could say we had a successful year,” Armstrong would say at the conclusion of the Memorial Cup tournament.

Two days after winning the OHA title, the Marlies opened the Memorial Cup tournament in the Forum against the Remparts.
The star was Bordeleau, who scored three times and set up another in a 5-2 Toronto victory.
Brad Winton and Glenn Goldup also scored for Toronto, which led 3-0 after one period and 4-2 after the second.
Andre Deschamps and Chouinard replied for the Remparts, who outshot the Marlies 40-33.
The second game would feature the Tigers and the Marlboros.
“We forecheck a lot and hit in the offensive zone,” Shupe said prior to the game. “We have played the same style all year. We play a tougher checking game than either Quebec or Toronto.”
Shupe had prescouted the Marlies.
“I think that young 23 (Bordeleau) really skated well and I was impressed with (Mark) Howe. And Dailey played well on defence, I thought.”
The difference between his team and the other two, Shupe felt, was Lysiak and McDonald.
“I don't think there is anyone in the country that can compare with them,” Shupe said. “They play a lot.”
Which was fine with Lysiak, who said: "In fact, the more ice time we get, the better we play.”
There were 6,088 fans in the Forum, including 500 from Medicine Hat, on May 9 and they watched Brad Gassoff break a 2-2 tie at 8:31 of the third period as the Tigers edged the Marlies 3-2.
Gassoff fired a 20-footer over Palmateer's right shoulder.
Ryan Wecker and Johnstone had Medicine Hat's other goals. Mark Howe scored both goals for Toronto, which got a superb 28-save performance from Palmateer. Clegg also stopped 28 shots.

The Tigers would meet the Remparts two nights later. A Quebec victory would leave the three teams with 1-1 records, meaning the finalist would be decided using a tiebreaking formula involving a goals-for and goals-against ratio.
Going into the last round-robin game, Toronto was plus-2, Medicine Hat was plus-1 and Quebec was minus-3.
"We will play better than we did (against Toronto),” said Savard, the Quebec captain. "We'll beat Medicine Hat and then meet Toronto again.”
Savard was right.
Medicine Hat's dream ended two nights later with a 7-3 loss to the Remparts, who scored six times in the first period.

The Marlies didn't leave any doubt in the final on May 12, scoring four times on the power play and winning 9-1 with Mark Howe scoring twice and adding three assists. Goldup and Peter Marrin added two goals each for Toronto, with singles coming from Dillon, Winton and Bordeleau.
Dupuis scored Quebec's lone goal.
Howe, with four goals and four assists in three games, was named the tournament's most valuable player and awarded the Stafford C. Smythe Memorial Trophy.
"I didn't do anything special,” Howe said. "They should have given out 19 trophies. The Marlboros were 19 players, not one.”

Coach Armstrong said it was "as exciting as capturing the Stanley Cup.”
“It's great to be associated with any championship club,” added Armstrong, who captained four Stanley Cup winners in Toronto and now had a Memorial Cup in his first season as a coach. "I was surprised I liked the Marlies' coaching job as much as I did. It's like having a big family, I guess. It can be a very rewarding experience.”