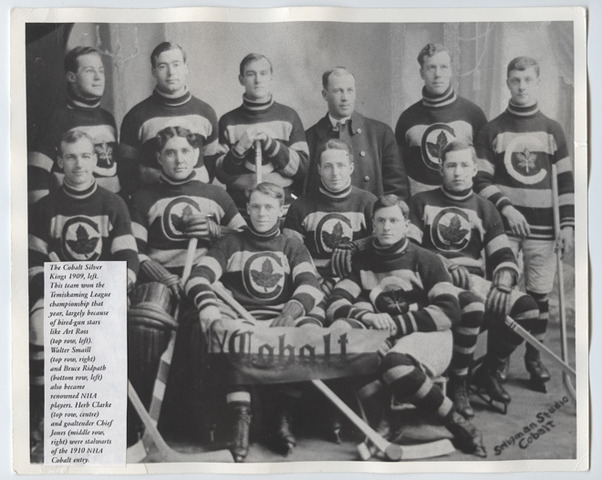 DISCLAIMER: The text in the photograph describing the location of different players are for another photograph of the Cobalt team (this one http://hockeygods.com/system/gallery_images/8278/original.png?1331451541). Art Ross and Walter Smaill are not present in this photograph, and while Bruce Ridpath is seated bottom row left also in this photograph, Chief Jones and Herb Clarke are in different positions.

Cobalt Hockey Club - 1909 - The Cobalt Silver Kings - Hockey was religion in Cobalt long before Foster Hewitt or Hockey Night in Canada. Hockey and betting are enshrined in the Cobalt Song – “We’ve bet all our dough on hockey”. The song was written in 1910, when hockey in Cobalt was at its peak, and, indeed, when the town itself was in many ways at its peak.

Hockey teams were started in Cobalt, Haileybury and New Liskeard, and the Temiskaming Hockey League was formed, playing for the solid silver O’Brien trophy. Poor cousin New Liskeard though, could never match the deep pockets on the mine owners and managers that financed the Cobalt and Haileybury teams. The Sports Palace was built in Cobalt, an enclosed arena seating 3,500 people, complete with a heated seating area, electric lights and even an electric organ. Soon, there was a bitter rivalry between the Cobalt Silver Kings and the Haileybury Hockey Club.

In the closing days of the 1909 season, Cobalt enlisted the great Art Ross, paying him $1000 a game to help Cobalt beat Haileybury. That at a time when most players only made $1800 per season, and most of the miners were making less than $2.00 a day. Cobalt won, taking the O’Brien Trophy.

The next season, 1910, Cobalt and Haileybury joined the upstart National Hockey Association (NHA), along with 5 other teams, including the Ottawa Senators and the Montreal Canadiens. The NHA was formed by Ambrose O’Brien, son of the owner of the O’Brien Mine, M.J. O’Brien. O’Brien had made a bid to have his team, the Renfrew Millionaires, into the elite league of the time, the Eastern League. But this bid was rejected since the Eastern League thought Renfrew was too small. The NHA proved to be the downfall of the Eastern League and was the forerunner of the National Hockey League, NHL, which started in 1917. To start the NHA, O’Brien enlisted teams in Ottawa, Montreal, Cobalt and Haileybury, in addition to his own Renfrew team In addition, O’Brien started a new team in Montreal, consisting entirely of French Canadian player. The Club de Hockey Canadien – the Montreal Canadians - was born, and O’Brien even designed their famous CH crest.

Cobalt and Haileybury faced off again in the 1910 season. That year, it was Haileybury that carried the day. It is rumoured that Noah Timmins bet $40,000 on that game – many years salary for the men working in his mines. And many miners bet and lost more than they could afford. The NHA championship was taken that year by the Montreal Wanderers, giving them the Stanley Cup.

The days of Cobalt and Haileybury playing in the big leagues were at an end though, and these teams did not return for the 1911 NHA season. As money flowed north to the gold camps of Timmins and Kirkland Lake, big league teams could no longer be supported by the Silver City and its neighbour. Hockey was becoming a business, and the days of towns like Cobalt playing against the big cities of the south were over.

Another reason that the teams didn’t return for the 1911 NHA season was that the miners were not happy. The NHA teams played only 12 games a season, including only 6 home games. The miners complained that there were not enough games and the intervals between games were too long. The miners, it seemed, preferred quantity to quality.

The Cobalt and Haileybury teams were split to form a 4 team league known as the Mines League. Games were played twice a week, sometimes 3 times a week. And the deep pockets of the mine owners ensured that they were still able to pay some top flight players to lure them away from the “Big Leagues”.

The Mine Managers Association also formed a ladies’ hockey team, coached by coaches from the Mines League. This team played exhibition games against teams from southern Ontario, and helped increase the interest of local women in hockey, previously shunned as a man’s sport.

The dawn of World War I took its toll on hockey in Cobalt, as many players enlisted and joined Canadian units in the trenches of Flanders. And as Cobalt began its slow decline, the calibre of play was never the same again. But hockey continues to play an important role in Cobalt, inspiring dreams of the NHL for many Cobalt youngsters. Indeed, Mario Chitaroni of Cobalt achieved local fame playing for the Italian national team in the 1998 Winter Olympics in Nagano, Japan and again in the 2006 Olympics in Turin, Italy.

Today, many small towns across Canada can boast famous hockey players, but few can boast a team like the Silver Kings. It seems almost impossible to believe today, looking at tiny little Cobalt, that their team once played against the Ottawa Senators and the legendary Montreal Canadiens. But it is true. Such was Cobalt in its prime.