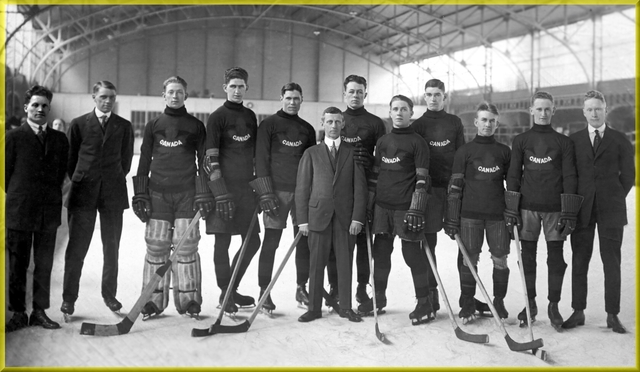 The writing in this photo says - This was taken after our first practice at Antwerp.
Winners of the first Olympic hockey gold medal. Defeated opponents in the final round by a combined score of 29-1. The Olympic team principally comprised the Winnipeg Falcons, winners of the Allan Cup as Canadian amateur champions. Most of the players were Icelandic Canadians. The team captain was Frank Fredrickson who would later be enshrined in the Hockey Hall of Fame. Konnie Johannesson would be inducted in both the Canadian Hockey Hall of Fame and the Canadian Aviation Hall of Fame. Harold Halderson was one of Fredrickson's teammates with the 1925 Victoria Cougars when the Cougars won the Stanley Cup.

Fredrickson and Johannesson served in the Royal Flying Corps during the Great War, as did Herbert 'Hebbie' Axford, who was awarded a Distinguished Flying Cross for valour in action against the enemy. The London Gazette of 2 November 1918 cited Axford's DFC thus:
On the 16th August this officer led his formation to bomb certain docks; these docks were exceptionally well guarded, and our planes were heavily handicapped by adverse weather conditions; moreover, the formation had suffered casualties, and his own machine was badly damaged; he nevertheless succeeded in reaching and bombing his objective in the face of an intense barrage. On the following day he again successfully bombed the same objective. Lieut. Axford has taken part in thirty-four successful bomb raids, inspiring all who serve with him by his personal courage and intense devotion to duty - Indeed, most of the Winnipeg Falcons were Great War veterans who had played together in the Manitoba military leagues at the time of the war. In war the Falcons proved themselves as worthy in battle as they did on the ice. Three of the original Falcons -- Ollie Turnbull, Buster Thorsteinson and George Cumbers -- were killed in action during the war.