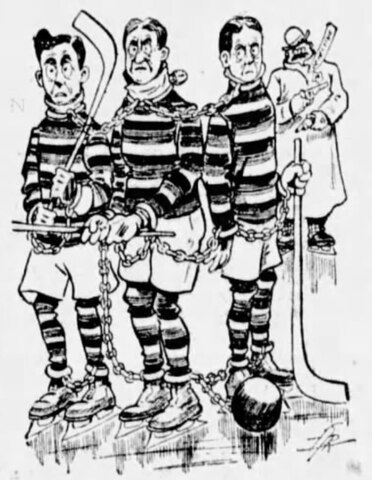 The Ottawa trio had been arrested by Montreal police for foul play stemming from an ECAHA game against the Montreal Wanderers earlier in the month on January 12, and the Smith brothers played the January 26 game against the Montreal Victorias while under arrest. Harry Smith scored 6 goals, and his older brother Alf added 2 of his own, in a 12-10 victory over the Victorias in Montreal.

Harry Smith was eventually acquitted of his assault charges stemming from the Wanderers game whereas Charlie Spittal and Alf Smith were each fined $20.

During the January 12 game Charlie Spittal knocked out Cecil Blachford with a blow to the head, Alf Smith hit Hod Stuart in the head, and Harry Smith hit Ernie "Moose" Johnson across the face. Montreal Wanderers won the game 4-2 and eventually the ECAHA championship and the Stanley Cup (after first having lost the Stanley Cup to the Kenora Thistles in January, they won it back in March).