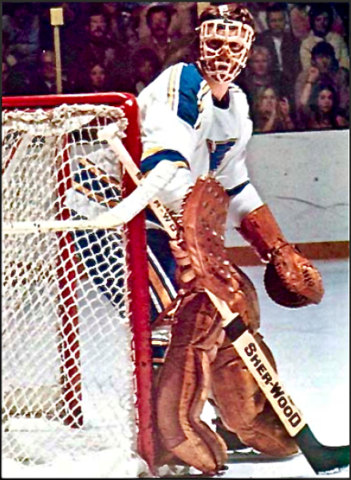 Stephenson played his junior Hockey in the Manitoba Junior Hockey League / MJHL with the Winnipeg Braves for 2 seasons, being named the league’s top goaltender and MVP in 1965, helping the Braves win the 1965 Turnbull Cup as Manitoba Junior Champions. He was picked up by the Edmonton Oil Kings for the 1965 Memorial Cup final, winning only 1 game in 5 games played.

Stephenson then joined the Canadian Men’s National Ice Hockey Program / Team run by Father David Bauer and stayed with them until 1971, winning a bronze medal at the 1967 Ice Hockey World Championships in Vienna, Austria. He also won the Bronze Medal at the 1968 Winter Olympics in Grenoble, France.

Stephenson then signed as free agent with St. Louis Blues, January 2, 1972, making his NHL debut on January 30, 1972 vs the Boston Bruins at Boston Garden in a 5-2 Bruins victory. Stephenson only played 2 games for St. Louis that first season, playing the majority with their farm team, the Kansas City Blues in the Central Professional Hockey League.

In Philadelphia, Stephenson was the backup to the legendary Bernie Parent, playing just 12 games, winning 7 during the regular season. Expected to sit as a backup for the playoffs, Stephenson was called into action when Parent took a shot from teammate Gary Dornhoefer on the inside of his right leg during warmups before the start of a semifinal series against the New York Islanders. Parent crumpled to the ice in agony before limping to the locker room on one leg. He emerged with a cast from his thigh to his calf. Stephenson would win that game with a shutout 4-0 on April 29 and get a 5-4 OT victory on May 1st. Parent returned on May 4th, having suffered only a serious bruise and the Flyers went on to win the 1975 Stanley Cup championship.

Parent missed much of the following season with a back injury. Pressed into the starting role, Stephenson recorded 40 wins, 10 losses, 13 ties. His greatest Hockey memory was an exhibition game against the Soviet Red Army team at the Spectrum in Philadelphia on Jan. 11, 1976. The game is remembered for the Soviets leaving the ice to protest violent play. They returned, only to lose, 4-1, to a satisfied Stephenson, who felt the game was redemption, of sorts, for not getting a chance to defeat the Soviets at the Olympics. Stephenson was second in the NHL in wins and fourth in GAA that season with a 2.58.

Stephenson and Parent shared netminding duties early in the 1976 playoffs, but Stephenson was the starter when the Flyers took on the Montreal Canadiens in the finals. Across the ice, he faced Ken Dryden, his old Canadian National teammate. Montreal swept the series, winning each of the first three games by a single goal and the final by two.

In the offseason, Stephenson sought a salary increase to reflect his new role with the team. The Flyers balked, and the goalie sat out the first two months of the next season before rejoining Philadelphia in December, 1976. He would play in 4 playoff games that spring, winning 1, as the Flyers were eliminated in the semi-finals. Stephenson played 2 more seasons in Philadelphia before they traded him to the Washington Capitals on August 16, 1979.

Of all Philadelphia goaltenders who played in 100 or more games with the Flyers, only Bob Froese had a better winning percentage than Stephenson's 69.3%.

In Washington, Stephenson played 2 seasons, taking over the reins as the Capitals top netminder in 1979-80, setting single-season franchise records (since broken) for wins (18), games played (56) and goals against average (3.57).

Wayne Stephenson is a "Honoured Member" of the Manitoba Hockey Hall of Fame, inducted in 1986.