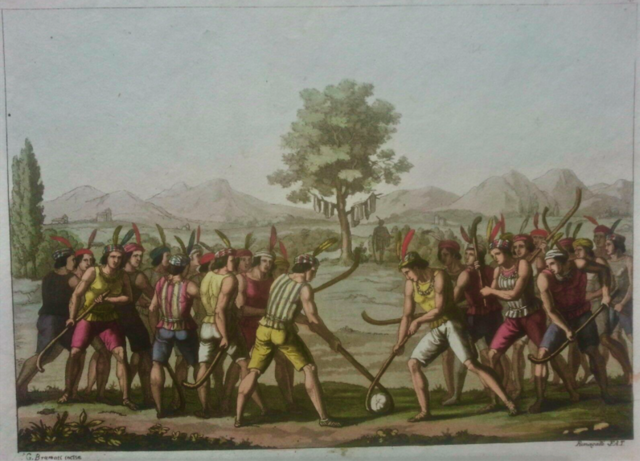 Mapuche Indians / People of Chile playing the game of Ciueca (La Chueca) or Palín, a field Hockey-like game with curved wooden sticks and a large ball.

Chueca / Palín INFORMATION
The playing sticks are known as wiño are used, and made of native wood, with a natural curvature. The ball is called pali or fungul, and made of wood / bark or leather with a wool center, tightly packed.

5 to 15 players aside, and play on a field approximately 200 long by 12 meters wide. The center of the playing field is marked by a hole from where the ball / pali is hit by the stick / wiño and sent to the side. Players then compete to carry the ball on the stick and /or pass the ball in the air to each other. The game is also played on the ground too, like field Hockey.

There is a line or goal line the players try to maneuver the ball at ground level or in height with the ball to score a point (tripal). Whichever team scores 4 straight points, wins the contest.

There is a feast after the tournament, as the players will share a meal together. Playing these games are a way to strengthen the relationship between the communities.