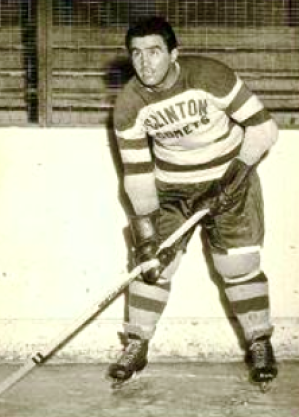 Nolan played his first pro Hockey with the Toledo Mercurys in the 1951-52 International Hockey League / IHL season. He had a solid year, scoring 11 goals, 11 assists during the regular season (41 games) and had 1 goal, 1 assist in the playoffs, helping the Mercurys win the 1952 Turner Cup championship, as IHL champs.

Nolan played another season with Toledo, and then joined the IHL Louisville Shooting Stars, which only existed for 1 IHL season.

Nolan then joined the Clinton Comets of the Eastern Hockey League / EHL for the 1955-56 season, becoming the first player in the history of pro Hockey to rack up over 300 penalty minutes (352 to be exact) in a season. Nolan had 3 assists in the playoffs, helping the Comets reach the 1956 Turner Cup finals.

Nolan was released from the Clinton Comets in December, 1956. At the time, Nolan led the league in penalty minutes again. Upon his release, Nolan was signed by the EHL Johnstown Jets, where he finished the season, and retired at seasons end.

The Jets were the inspiration for the 1977 movie "Slap Shot" starring Paul Newman where Joe appears as "Clarence 'Screaming Buffalo' Swamptown," the head-dress wearing oldtimer brought in to try and help the Bulldogs defeat the Chiefs in the final game.

Joe Nolan, who in fact was a full-blooded Ojibwe/Ojibwa Indian.

In the Movie, Jim Carr, Charlestown Chiefs play-by-play announcer described Clarence Swamptown, the character that was played by Joe Nolan in Slap Shot "Here's a name for you nostalgia fans: Clarence "Screaming Buffalo" Swamptown. I'll never forget an exclusive interview in which Swamptown revealed that he calls his Hockey stick the "Big Tomahawk," and he usually refers to the opposing players as "the little scalps"

After retiring, Nolan returned to Clinton, becoming a linesman and referee in the EHL, ECAC and youth Hockey.

He was also a fixture at Alteri's Restaurant, a famous Hockey spot in Clinton.