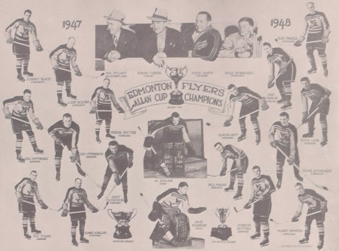 The Flyer’s thrilling victory over the Ottawa Senators energized the entire city of Edmonton, and their victory parade attracted more than 65,000 people, half the population of Edmonton in 1948. The national title was only the third national Hockey title ever won by an Alberta team, and several members of the team would go on to successful careers in the National Hockey League.