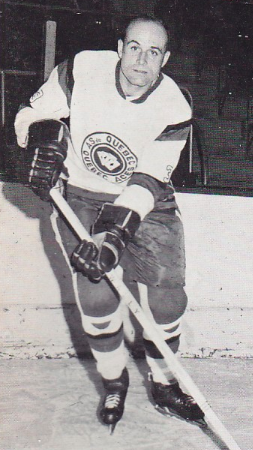 Price played his junior Hockey with the St. Michael's Majors from 1952 to 1956, having a outstanding final year with 10 goals, 22 assists.

Price then turned pro to start the 1956-57 season, playing with the Winnipeg Warriors of the Western Hockey League / WHL, and late in the season joined the Rochester Americans of the American Hockey League / AHL for their playoffs. Rochester made it all the way to the Calder Cup finals, losing to the Cleveland Barons.

Price played the 1957-58 season for the Rochester Americans and got the call-up to the NHL for 1 game for the Toronto Maple Leafs in 1958. Price started the next season for the Maple Leafs, but after playing in 28 games during the season and 5 playoff games.

On October 3, 1959, Price was traded to the New York Rangers for Hank Ciesla, Bill Kennedy and future considerations. Price would play just 7 games for the Rangers with 0 points, and played mostly with the Springfield Indians, helping the Indians win the 1960 & 1961 Calder Cup as American Hockey League Champions.

Price was traded to the Detroit Red Wings for Pete Goegan, February 16, 1962, and finished the season in Detroit, playing 20 games for the Red Wings.

Price played the next 3 seasons for the Baltimore Clippers of the AHL, and was then traded to the Montreal Canadiens with Earl Ingarfield, Gord Labossiere, Dave McComb and cash for Cesare Maniago and Garry Peters, June 8, 1965. Price played for the Canadiens and the the AHL Quebec Aces during the next 2 seasons, before being claimed by the Pittsburgh Penguins from Montreal in the NHL Expansion Draft, June 6, 1967.

Price had his best season in the NHL with Pittsburgh, scoring 6 goals, 27 assists in his first year there (1967-68) but played only 2 seasons with the Penguins.

Price was then claimed by the Los Angeles Kings from Pittsburgh in the NHL Reverse Draft, June 12, 1969, and played the 1969-70 season with the AHL Springfield Kings. Price then played the next season for Los Angeles in the NHL, and started the 1971-72 season in Springfield before being traded back to the Montreal Canadiens by Los Angeles with Denis DeJordy, Dale Hoganson and Doug Robinson for Rogie Vachon, November 4, 1971. Montreal then sent Price to their AHL affiliate, the Nova Scotia Voyageurs to finish the 1971-72 season, helping the Voyageurs win the 1972 Calder Cup as American Hockey League champions. Price was awarded the Eddie Shore Award as the AHL Outstanding Defenseman in 1970 & 1972, and also selected to the AHL First All-Star Team in 1970 & 1972.

Price was again traded, this time to the NHL Atlanta Flames by Montreal for cash and future considerations, August 14, 1972. Price played 2 seasons in Atlanta, before playing his final season of professional Hockey with the AHL Nova Scotia Voyageurs in the 1975-76 season, once again helping the Voyageurs win the 1976 Calder Cup as American Hockey League champions. Price was again selected to the AHL First All-Star Team in 1976.

Price retired as a champion after the 1976 Calder Cup championship.

Noel Price was inducted into the American Hockey League Hall Of Fame in 2008.