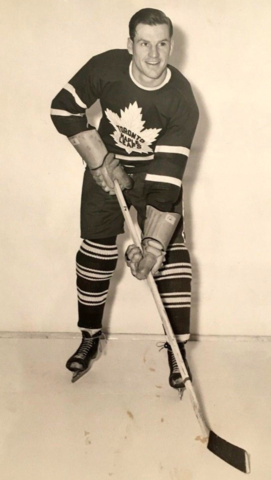 Gardner played his junior Hockey with the St. Boniface Canadiens (1940-41), Winnipeg CUAC (1941-42) and the Winnipeg Esquires for the 1942-43 season. Mortson was selected as a replacement player for the Winnipeg Rangers during their 1943 playoff run, and what a replacement Mortson was, as he scored 11 goals, 3 assists in 10 games played for the Rangers, helping them win the 1943 Memorial Cup championship.

After the Hockey season in 1943, Gardner enlisted in the Canadian military and served until the end of the Second World War, and like most good Canadian Hockey players during that time, played on some type of military team, with Gardner playing for the Port Arthur Navy.

In 1945, Gardner signed with the New York Rangers and joined the New York Rovers of the Eastern Amateur Hockey League / EAHL. Both teams played at Madison Square Gardens / MSG. There he joined forces with wingers Rene Trudel and Church Russell to form the "Atomic Line". Together, they seared their way across the league as Gardner netted 41 goals and 73 points in 40 games. Gardner won the John Carlin Trophy as the EAHL Scoring Champion in 1946.

The New York Rangers were in need of scoring in those days, so GM Lester Patrick brought the Atomic Line to play for the Rangers, hoping they would ignite the team - Their collective impact, however, was minimal at best.

Late in the 1947 season, he precipitated what has been described as biggest, longest brawl in Hockey history. The last place Rangers were playing the league-leading Montreal Canadiens in Madison Square Gardens on March 16, 1947. Montreal was leading the Rangers 4-3 with 32 seconds left in the game. If the visitors could hold the lead they’d clinch first place and a new prize of $1,000 for each player the NHL was giving away that year. The downtrodden Rangers, on the other hand, needed the win to stave off elimination from a playoff berth. As Hockey games go, this one was ripe for mayhem. The teams had been nurturing individual and collective hatreds all season. Montreal’s Reardon and Maurice Richard squared off with Bill Juzda and Bryan Hextall of the Rangers in the second period.

As Ken Reardon cruised the blueline in that final minute, Hextall’s hip loomed in front of him. Reardon bounced off Hextall like a pinball right into Cal Gardner’s waiting stick, which obligingly bludgeoned Reardon across the mouth. “My upper lip,” Reardon said, “felt as if it had been sawed off my face.”

Reardon was escorted to the MSG’s medical room along a route that might well have been a minefield. His chief obstacles included the Rangers’ bench, three rows of hostile fans and an alleyway populated with anti-Montreal guerrillas. Shouted a balding fan brandishing a fist at the injured Canadien: “Reardon, I’ve been waiting a long time for you to get it. You louse.” “That did it,” Reardon said. “I swung my stick at him – then a cop grabbed me and I fell.” The disturbance aroused the Rangers who rose from their bench. From a distant vantage point of the Montreal bench across the ice, it appeared the entire New York team was preparing to pounce upon Reardon. “Get the hell over there,” implored coach Irvin, standing on his bench. The Canadiens poured over the boards to go help Reardon, and found the Rangers had not laid a stick on Him. Instead of retreating, the Canadiens began brawling with the fans. And so, Round 1 of what the New York Times called “the grandest mass riot in the local history of the NHL” had begun. Montreal’s Butch Bouchard, who led the stampede, clouted the bald-headed fan with his stick while goalie Bill Durnan and Richard sought other prospective victims. The sight of their defenseless followers being manhandled by the stick-swinging enemy disturbed the Rangers. Finally, somebody on the Rangers bench yelled, “Charge!” And the counterattack (and what turned out to be a real battle) was underway. Within seconds four main events were in progress. (1) Richard vs. Juzda, (2) Bill Moe vs. Durnan, (3) Hal Laycoe vs. Leo Lamoureux, (4) Bouchard vs. Hextall. “It became an almost endless fight,” wrote Bill Wittig in the New York Sun. “No sooner was one group of players quieted down than another would start at it again. In one span there were 15 fights.” Montreal won 4-3 and, but for one man, the Canadiens toasted their victory (and escape from Manhattan) on the train ride home. That one disconsolate man was Reardon, who needed 14 stitches to close his lip. “I was the guy who started the damn fight,” Reardon said, “but believe it or not, I never saw it. Right after the cop knocked me down, I got up and walked to the clinic. I didn’t find out until later when the guys came into the bloody room all cut. Sorta burns me up. I coulda had a great time!”

Reardon vowed revenge on Gardner, signaling the beginning of a bitter feud. The dispute climaxed in November, 1949 when Gardner, by now a Toronto Maple Leaf, had his jaw shattered by Reardon. Desperately hoping to end the feud, NHL president Clarence Campbell ordered each player post a $1,000 bond, on the condition the money only be returned if the enemies refrained from fighting. They never fought in a game, but held a hate inside them about each other.

Years later, Cal's son Dave Gardner said - “My dad (always said), ‘If I saw (Reardon) on the other side of the street, I’d walk across and try to deck him right now”

Gardner would play for the Rangers for 2 seasons, scoring just 20 goals. Gardner was then traded to the Toronto Maple Leafs by the Rangers with Bill Juzda, Rene Trudell and the rights to Frank Mathers for Wally Stanowski and Moe Morris, April 26, 1948.

Playing for the Maple Leafs was the highlight of "Pearly's" career. In the four years in Toronto he scored 58 goals, 163 points in 247 games, he also missed majority of the 1949-50 season due to a broken jaw vs. Montreal, November 11, 1949. Gardner played in two NHL all star games and won two Stanley Cup championships in 1949 and 1951.

Gardner was traded to the Chicago Black Hawks by Toronto with Ray Hannigan, Al Rollins and Gus Mortson for Harry Lumley, September 11, 1952. Gardner scored 11 goals, 24 assists during the one season he played in Chicago.

Gardner was then traded to the Boston Bruins by Chicago for cash, June 26, 1953, and would play his final 4 NHL seasons in a Bruins jersey, scoring 60 goals, 85 assists while in Boston.

Gardner was then named playing coach of AHL Springfield Indians, July 27, 1957 and helped the team reach the 1958 Calder Cup final, where they lost to the Hershey Bears 4 games to 2.

Gardner moved back to Boston and got involved in the Bruins' radio broadcasts. Later he would move to Toronto and was part of the Maple Leafs radio shows.

Gardner would still spend a lot of time at local rinks with his sons Dave and Paul. Both would enjoy lengthy careers in the National Hockey League.

Calvin (Cal) Gardner was inducted into the Manitoba Hockey Hall of Fame in 1985.