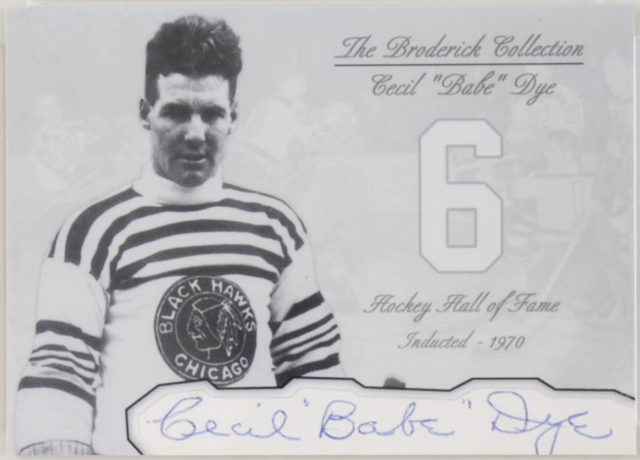 On the reverse of this card, it says;
The Broderick Collection
Cecil "Babe" Dye

Babe Dye turned down a significant sum of cash to play major league baseball, choosing instead to excel at Hockey in his hometown of Toronto.

Cecil, dubbed "Babe" by his teammates because of his love of baseball, an obvious reference to the great Babe Ruth, was one of the NHL's earliest scoring sensations. He often jostled with the likes of Cy Denneny and Joe Malone in the race for the scoring championship. Three times between 1920 and 1925 Dye led the league in scoring. He twice scored goals in 11 consecutive games and in the 1924-25 season he counted 38, a Toronto record that stood for 35 years. In his first six seasons, Dye scored a remarkable 176 goals in just 170 games, a pace that wasn't equalled until Wayne Gretzky came along in the 1980s.

There was no doubt that "Hockey's Babe Ruth" was destined to be enshrined in the Hockey Hall of Fame. Unfortunately that didn't happen until 1970, eight years after he passed away.