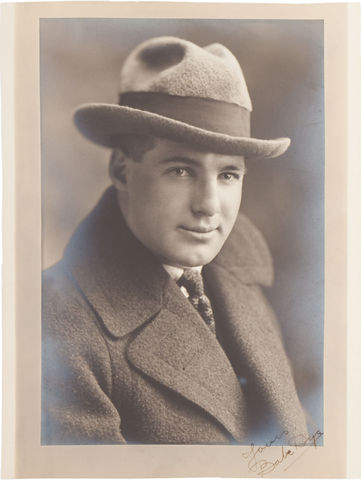 Dye learned the skills of Hockey from his mother on a backyard rink in Toronto.

Cecil Dye was dubbed "Babe" by his teammates because of his love of baseball, an obvious reference to the great Babe Ruth.

Dye played junior Hockey from 1916 to 1918 for the Toronto Aura Lee and Toronto De La Salle of the Ontario Hockey Association. As a senior, he played for the amateur Toronto St. Patricks in 1918–19.

Dye was also a professional baseball player, beginning his career with the minor league baseball Toronto Maple Leafs of the International League (baseball) in 1920. He was sent to Brantford of the Class B Michigan-Ontario League, popularly known as the Mint League. The Boston Red Sox held an option on Dye but chose not to exercise it. In September 1921, the Brantford Baseball Club announced that it had sold Dye to the Buffalo Bisons of the IL for the highest price ever paid for a Brantford player. He had a strong season with the Bisons in 1923, and was then considered a top prospect for the major leagues. In September 1923, Dye announced that he was retiring from hockey to focus on baseball, but when hockey season started he re-signed with the St. Pats. After hockey season, he rejoined the Bisons for training camp in March 1924. Dye again played for the Bisons in 1925, and was sold to the baseball Leafs after the end of the season. He was released by Toronto in July 1926 and signed by the Baltimore Orioles of the International League, where he finished his baseball career that year.

Dye was loaned to the Hamilton Tigers for that team's NHL debut in the first game of the 1920–21 season. Dye scored two goals in the game and then returned to the St. Pats for the rest of the season.

He led the St. Patricks to the Stanley Cup championship in 1922, scoring nine goals in the five-game final series.

Over his first six seasons in the NHL, Dye scored 176 goals in 170 games, a pace that wasn't equaled until Wayne Gretzky came along in the 1980s and rewrote the NHL record book.

Dye's name is also in the record book on account of the 1922 Stanley Cup playoffs. The St. Pats played the champions of the Western Canada Hockey League, the Vancouver Millionaires, in a best-of-five finals. Dye scored two game-winning goals, including four in the fifth and final game, a 5-1 Toronto rout. In all he scored nine of the team's 16 goals, and those nine are still a Stanley Cup finals record that has stood for 90 plus years. This was to be Dye's only taste of Stanley Cup victory.

Before the 1926–27 season, the Toronto St. Pats sold Dye to the Chicago Black Hawks, a new NHL franchise. When New York Rangers owner Colonel Hammond discovered that Conn Smythe, then general manager of the Rangers hadn't expressed an interest in Dye, Hammond fired him. Smythe went on to becoming owner of the Toronto franchise and later renaming the team the Maple Leafs.

Dye had an outstanding season in Chicago, again leading the league in goals scored on the NHL's highest-scoring team, playing on a line with fellow Hamilton-born player Dick Irvin, who led the league in assists. Unfortunately, both players would soon suffer serious injuries that curtailed their playing careers. At training camp before the next season, Dye's leg was broken, which caused him to miss almost the entire 1927-28 season and he was never the same player again. He went scoreless for the Black Hawks in 10 games he played in the 1927–28 season and was then sold to the New York Americans after the season. Over 42 games in 1928–29, Dye had just one goal for the Americans.

In November 1929, he was traded to the minor league New Haven Eagles of the Canadian-American Hockey League. In February 1930, he was signed as a free agent by his former team in Toronto, which had been renamed the Maple Leafs. Dye played six games with the club in the 1930–31 season before being released.

Dye retired with the best goals-to-games ratio in the history of the game, and now remains the fourth-best in NHL history, behind only Mario Lemieux, Cy Denneny and Mike Bossy.

Following his retirement as a player, Dye coached the Port Colborne Sailors to the Ontario Sr A Finals, and the following season he became head coach of the Chicago Shamrocks of the American Hockey Association in 1931–32, winning the league title. Despite the team's success, Dye was fired just before the championship-winning game because he hadn't prevented the team captain from going to Toronto to get married between games of the championship series. Dye said the player was determined to go and there was nothing he could do about it. The Shamrocks ended up folding before the next season began.

Dye later took up the whistle as an NHL referee before departing the game for good.