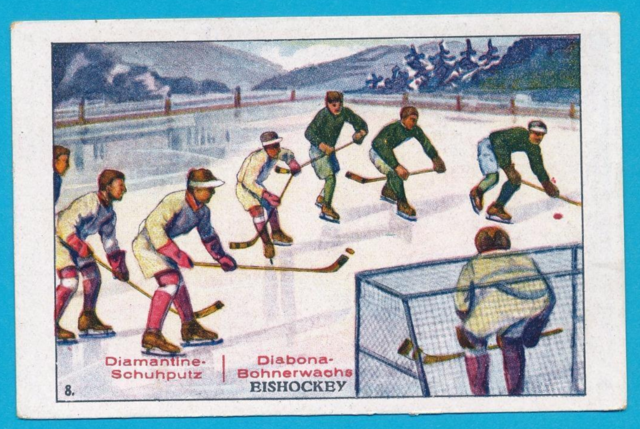 These trade cards were produced by a German company, Diamantine. The multi-sport set includes at least one card representing the big four sports with a Hockey issue number 8.

The cards have a white border with a colorful lithograph presented on the fronts. The back includes a blue-ink ad for Diamantine. The Hockey card in particular features a game between two unnamed teams. While being played outdoors, the game is still a formal one of sorts as the two teams are wearing uniforms and not casual clothing.

Various sports are featured in the set.

The names Diamantine-Schuhputz and Diabona-Bohnerwachs are printed on the front as is a small card number. These are actually two separate products – the first is a shoe shine and the second is a type of cream.

The exact date of the cards is unknown but they are believed to be from the 1920s. These cards are rare.