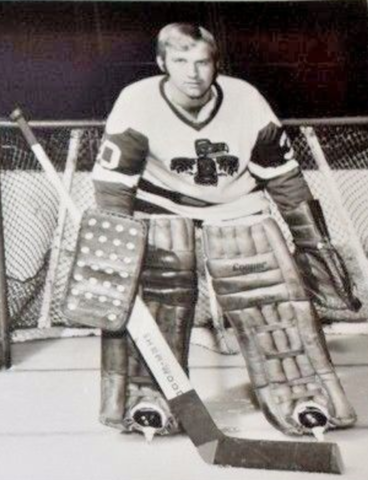 Dyck played his junior Hockey with the Swift Current Broncos and Estevan Bruins, where he helped the Bruins, winners of the 1968 Abbott Cup, Western Canada Hockey League / WCHL champions, and runners up in the Memorial Cup final.

During that 1970-71 season Dyck won the Del Wilson trophy as WHL's outstanding goalie. He also made the WHL All-Star team in 1970 and 71.

Dyck was then drafted by the NHL Vancouver Canucks - 3rd choice - 30th overall.

Dyck had a busy first year as a professional player, spending time with the Rochester Americans of the American Hockey League, the Seattle Totems of the Western Hockey League, as well as making his NHL debut with the Canucks. He played 12 games with Vancouver and managed to register his first NHL victory.

In 1972-73 Dyck backed up Dunc Wilson admirably and played 25 games for Vancouver. Ed also played 13 games for Seattle. He continued his backup role in Vancouver the following season (12 games), this time to Gary Smith. That 1973-74 season was Ed's last in the NHL.

Dyck chose to jump to the rival World Hockey Association for the 1974-75 season, as he became the first player signed by the Indianapolis Racers of the WHA. At the time of the signing Dyck said: " It's a kind of special feeling being first, but at the same time, I realize the responsibilities and challenges that go with it." He played 32 games during the 1974-75 season for Indianapolis, finishing with a 4.36 GAA, with a 3-21-3 record.

When the Racers signed Swedish player Leif Holmqvist as a free agent in June 1974, they awarded Dyck as compensation to Holmqvist's former club, HC Boden. Dyck travelled overseas and spent his final season of professional Hockey playing in Sweden.

Ed became an instant hit with the Swedish fans. He trained with Bodens BK for the first time on August 27, 1975, the same day as Boden was to meat local rivals IFK Lulea in a friendly game. To the delight of 2.563 people in the stands, Ed shut out the opponent. They chanted his name over and over. He was an overnight success. The fact that Ed had two fellow Canadians (Ron Smith - ex NY Islanders and Jeff Ablet (ex-Forth Worth - IHL) as his teammates made the transition to a foreign team a lot easier.

Dyck retired at the end of the season and returned to Canada.