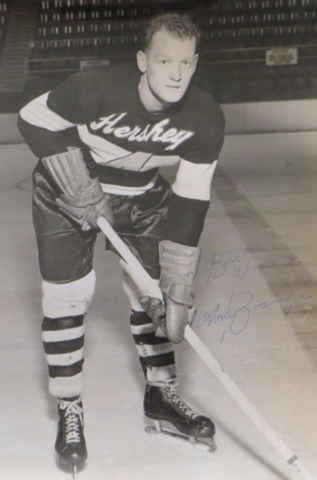 Branigan played junior hockey for the Winnipeg Monarchs, who were then a New York Americans' farm team, in 1939-40. The following season he turned pro with the Springfield Indians and got into six games with the Americans, scoring a goal In October 1940.

In 1941-42 Branigan played 21 games for the renamed Brooklyn Americans and scored two assists. When the team suspended operations in 1942, Branigan's rights were acquired by the Detroit Red Wings in a special dispersal draft.

After World War II Branigan returned to the pro ranks to play for the Red Wings' farm team the Indianapolis Capitals in 1945-46. The next season he joined the Hershey Bears for an eight year stay, winning the 1947 Calder Cup Championship. After that he went to the Providence Reds for four seasons (1954 to 1958) winning the Calder Cup championship in 1956.

Branigan finished his playing career in the Eastern Hockey League in 1960 playing for the Washington Presidents and the New York Rovers.

Branigan also coached the Washington Presidents and the New York Rovers from 1958-1960.