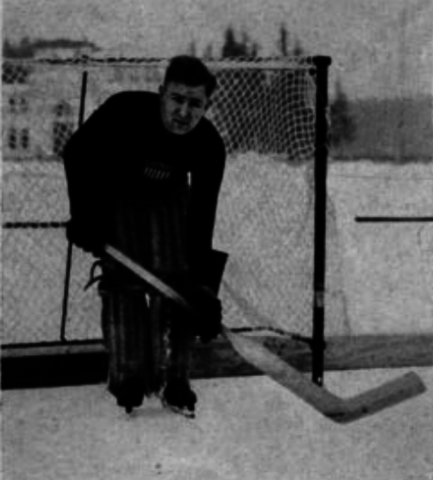 Lacroix picked up the nickname “Frenchy” in his childhood and carried it with him as he rose through the amateur Hockey ranks in the Boston area.

He joined the Boston Athletic Association in 1919 and played for their Hockey team, the Boston A.A. Unicorns in the city senior league and later the United States Amateur Hockey Association.

Lacroix was selected to the United States Olympic Hockey Team for the 1924 Winter Olympics. Lacroix had shutout games vs Belgium, France, Great Britain and Sweden before facing a powerful Canadian team team in the championship game. Lacroix allowed only 6 goals vs the Canadian team (who had scored 104 goals during their 4 games already played) in a 6-1 loss, helping the United States win a silver medal.

Lacroix was signed as a free agent by the Montreal Canadiens on November 10, 1925, and became the first American-born goaltender to stop pucks in the National Hockey League / NHL on November 28, 1925. This milestone often goes unnoticed, overshadowed by the sombre circumstances surrounding his NHL debut.

The Canadiens opened their 1925-26 schedule in Pittsburgh vs the Pirates with an obviously ailing Georges Vézina between the pipes. Vézina became ill, running a fever of 102 F and coughing up blood on the ice in the first period. He was later diagnosed with tuberculosis. Collapsing in the dressing room following the scoreless first period, Vézina had blocked his final shot and was replaced by Lacroix, who allowed a single goal the rest of the way as the Pirates emerged with a 1-0 victory on a goal by Tex White.

The 5-foot-7, 136-pound netminder saw action in four other games that season, winning one before Herb Rheaume took over for the remainder of the campaign. Lacroix allowed 16 goals against and a 3.43 GAA during his games with Montreal. Lacoix's only NHL victory was a 3-2 win on December 1, 1925 vs the Boston Bruins.

Lacroix was the team’s practice goalie in 1926-27 season, but didn’t see a minute of ice time outside practice as George Hainsworth laid claim to the crease for the next several seasons.

Laceoix signed with the Providence Reds of the Canadian–American Hockey League / Can-Am League for the 1927-28 season, posting a 1-3-0 record in four games. Also that season, Lacroix played for the Lewiston St. Doms in the North East Hockey League and went 8-12-2 in 22 games played.

In the 1930-31 season, the Boston Tigers would use Lacroix in net for four games, where Lacroix went 1-3-0 before he would retire after the season was over.