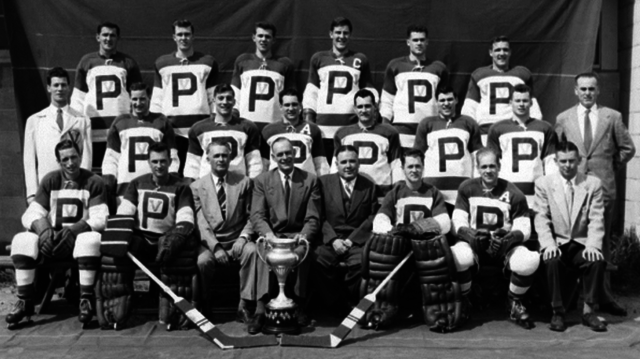 The Penticton club, lead by the Warwick brothers, lost out in the final last year to the Kitchener-Waterloo Dutchmen.

They were faced with what seemed to be almost certain defeat when the rugged Wolves grabbed three victories in the first four games. But they came back with three straight wins to take the battered tankard. Their victory brings the battered cup to the farthest west point in playing history.

Warwick First Both teams were pressing for the first goal late in the first period, but the V's scored first when Fairburn deflected in Grant Warwick's pass in front of Al Millar at 15:12. Penticton held an edge in the action packed second frame. But the Wolves only could do was to split four goals with the V's. Sudbury outshot Penticton 14-9 in the session.

Bill Warwick of the fabulous Penticton brothers' trio engineered the second Penticton goal, carrying the puck the length of the ice and then dumping it on McDonald's stick for the goal. Grant Warwick, a gnarled veteran of the National Hockey League, notched what proved to be the winner at 6:30 on a pass from McDonald. That looked like curtains for the Wolves, but they came back into contention with two quick goals late in the period, while the V's were shorthanded. With Doug Kilburn off two minutes for cross-checking, Kraiger struck first at 17:01 after grabbing a loose puck from a face-off inside the Penticton blue line. McClellan made it 3-2 just 20 seconds later when he slapped in a clearing puck.

This set the stage for a rousing third period, in which neither team was able to score. The Wolves again had a territoral advantage, but were stopped time and again by brilliant Ivan McLelland in the Penticton cage.

Game Sets Record The final game of the hard-fought series drew a crowd or more than 4,500, the largest in Penticton's history to attend a hockey game.

The teams see-sawed in the early stages of the first period. Grant Warwick was penalized at 2:33 for tripping, and the Wolves swarmed around the V's cage, without result. Just as Warwick was back into play, Baby drew a minor for cross-checking, and the V's had the upper hand. Kilburn went right out, catching the Sudbury netminder out of position, but he spun around and hit the goal post.

King drew a boarding penalty at 10:45 when he crashed Dick Warwick against the Sudbury players' bench, but the V's passing attack failed to click. Then Kilburn was chased for holding. King was dismissed again at 14:56 for cross-checking. The V's bottled up the puck in Sudbury's end and Fairburn clicked on a close-in shot from Grant Warwick and Conway.

Play Gets Rougher In the second stanza play grew rougher. At the five-minute mark, Grant Warwick was dumped by Heale. Bill Warwick grabbed the puck in the Penticton end and went up the ice, and laid it to McDonald to put the V's ahead 2-0. Things looked even grimmer for the Wolves when captain Heale was taken off after suffering an injury in a collision. Jack McDonald carried the puck up, circled behind the net and passed out to Grant Warwick, who fired the disc home.

Tomiuk and Bill Warwick mixed in a high-sticking exchange soon after, but there was no damage. Then the Wolves put on the pressure. Rucks and Baby drew minors at 12:02 for roughing. Harrison was sent off for tripping. Millar, noted for his left-hand stops, made a beautiful save on a shot by McIntyre. Kraiger took the puck from the face-off inside the V's blue line to score the Wolves' first goal of the night at 17:01. Kilburn was off at the time for high sticking. With the V's still shorthanded, McClellan slapped in the second Sudbury counter at 17:21.

The Wolves still pressed in the third period and McLelland had to be fast to thwart Harrison, who staged a beautiful solo rush. The pressure on the V's eased when Lavell was chased at the 11-minute mark for interference.

Millar was taken off the ice in the last 30 seconds as the Wolves made one final bid to tie up the game. But the V's held off the attack until the final whistle.