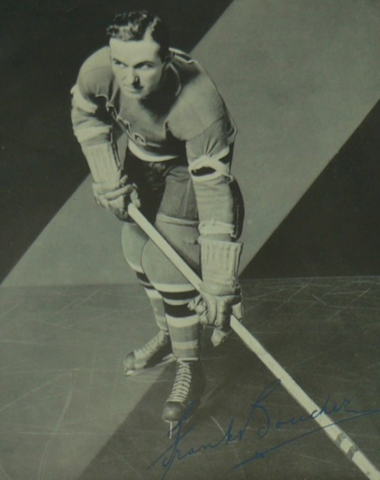 Boucher began playing Hockey on the Rideau Canal at the age of eight. He was on his public school team with Aurel Joliat before he joined the intermediate and senior levels of competition. He spent most of the 1919-20 season with the Ottawa New Edinburghs squad before joining the Lethbridge, Alberta, detachment of the Royal North West Mounted Police and playing for the Lethbridge Vets. In 1920 he was sent to Regina, Saskatchewan, for training and made a name for himself as a standout member of the 1920-21 Redcoats. It was at this point that Boucher attracted the attention of the Ottawa Senators, who eventually purchased his discharge and placed him in the lineup in time for the 1921-22 NHL schedule.

Boucher spent one year in the nation's capital before he was sold to the Vancouver Maroons of the PCHA where, he became one of the stars of the West Coast, scoring 58 goals in 113 games over four seasons. Although he accumulated respectable offensive totals, Boucher's popularity derived from his exceptional passing. Beginning in 1922-23, he was chosen as either a starter or a substitute on the PCHA All-Star Team for three straight years. When the league disbanded in 1926, Boucher was claimed by the Boston Bruins. However, before playing a single game in Boston, he was purchased by the New York Rangers at the insistence of his old western rivals, Bill and Bun Cook, who had experienced Boucher's skills firsthand.

"Gentleman Frank" was inserted between the Cook brothers during the Rangers' inaugural NHL season in 1926-27. The unit jelled and exhibited an advanced level of play that surpassed all expectations. The Bread Line developed into one of the most formidable combinations in NHL history. They were such a perfect fit that New York coach Lester Patrick allowed them to devise plays at one end of the rink while the remainder of the team practiced down at the other.

During the decade they played together, Boucher and the Cooks accumulated over 1,100 points. They led the Rangers to their first Stanley Cup in the team's second year of existence in the spring of 1928. Boucher dominated the post-season scoring with seven goals and 10 points, including both of New York's goals in the Cup-clinching 2-1 triumph over the Montreal Maroons in the final game of the best-of-five series. Five seasons later he contributed four points to the Rangers second Cup victory at the expense of the Toronto Maple Leafs in 1933. The Rangers also reached the Finals in 1932.

The Rangers hired him to coach the New York Rovers, a minor-league team that also played at Madison Square Garden, and guided the Rovers to the championship of the Eastern Hockey League in 1938-39. When general manager Lester Patrick made the decision to retire from coaching prior to the 1939–40 season, he hired Boucher, who then led his Rangers to the Stanley Cup Championship that season. That same regular season he pulled goaltender Dave Kerr with two minutes left in the game in an attempt to tie the score, initiating a trend that would become exceedingly popular in the coming years.

Boucher remained New York's bench boss for the next 10 winters, adding the portfolio of general manager to his responsibilities in 1946-47. He remained coach and general manager until 1948-49, when he co-coached the team with Lynn Patrick before stepping aside to focus strictly on the responsibilities of GM. He stayed on in that capacity until 1954-55, although he helped Murray Patrick coach the club in 1953-54.

While still affiliated with the Rangers, Boucher functioned as chairman of the NHL rules committee for 15 years. He worked in tandem with Cecil Duncan of the Canadian Amateur Hockey Association to bring about the introduction of the center red line in 1943-44. This innovation allowed teams to pass the puck out of their own zone and consequently produced a more exciting brand of hockey throughout the league. After leaving the NHL permanently, Boucher returned to amateur hockey to use his administrative expertise. Between 1959 and 1967 he served as commissioner of the Saskatchewan Junior Hockey League. During the 1966-67 season he performed the same duties for the Canadian junior league as well.

Boucher's uniform number 7 hangs in the rafters of Madison Square Garden, although it was retired for a later Ranger, Rod Gilbert. Although later Rangers such as Gilbert and Mark Messier have been more honored by recent fans, Boucher's status as the star of two Ranger Stanley Cups and the coach behind another marks him, except perhaps for team builder Lester Patrick, as the greatest Ranger of them all.

On February 9, 1962, Boucher was presented the Sportsmanship Brotherhood's annual award in New York. He was honored posthumously with the Lester Patrick Trophy in 1993 for his immense contribution to the game in the United States.