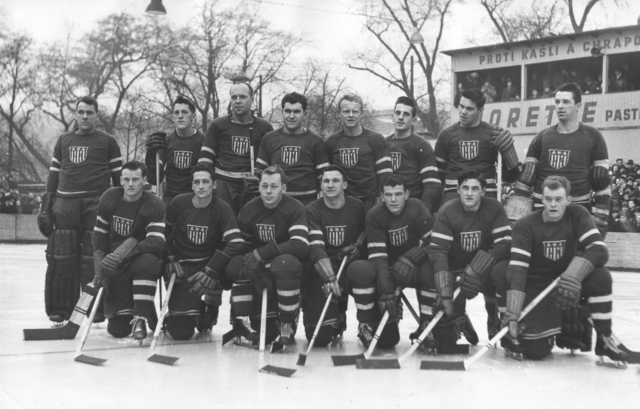 Just before the Americans were to play their first game of the Olympic tournament, the IOC relegated Hockey to an "unofficial" event. Then, on February 7th, a compromise was reached whereby only the U.S. entry would be considered unofficial by the IOC. The team — the AHA team — would play all opponents and be placed in the standings, but it could not qualify for a medal and all statistics from games against the Americans would not count. In the end, the AHA team played, but it was disqualified from the competition.

When the AHA's American team took the ice, they played like professionals in a tournament full of amateurs. They thumped Poland 23-4 before thrashing Italy 31-1. However, Team USA had a tougher time with the stronger teams and fell to Switzerland and Czechoslovakia in addition to weathering a 12-3 beating from the Canadians. Although the Americans led the tournament in scoring with 86 goals, their 5-3 record was only good enough for fourth place. The Canadian and Czech teams both finished 7-0-1 in the round-robin tournament, but the Canadians took the gold on the strength of a stronger goal differential.

Because this tournament was also the Ligue Internationale de Hockey sur Glace (LIHG) (forerunner of the IIHF) World Championship, the AHA team maintained a fourth place in that ranking.

The IOC eventually came back around, too. It agree to let the pro AHA team represent the U.S. as long as the team couldn't win a medal or appear in the tournament's official standings. That's why if you look at the 1948 Winter Olympics ice Hockey standings in a record book, the U.S. team is usually listed as a footnote just below the Italian powerhouse that gave up 156 goals en route to an 0-8 record.

I am so happy I found this photo! My Uncle Al Opsahl was captain of the Olympic team and is in the bottom row. Is there a way I could order a copy of this print somewhere?